It’s Easter Monday and the weather outside is simply stunning. So I decide to go for a long walk around Central Park. My hotel is right on 5th Avenue, between 42nd and 41st street. So on my way back I am able to watch the Easter Parade and some of the most outrageous hats I’ve ever seen! 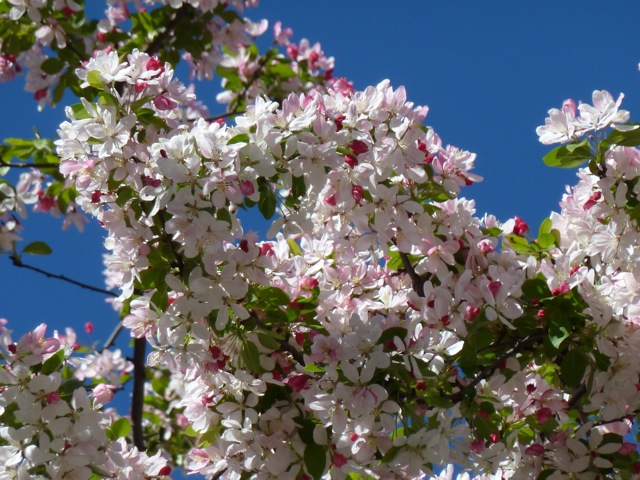 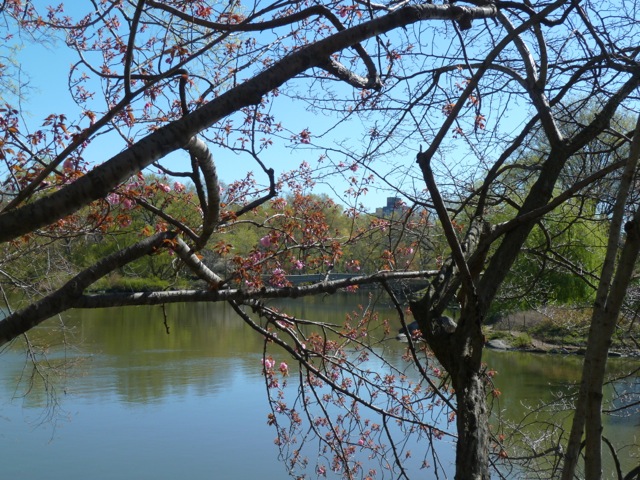 GETTING TO THE AIRPORT

I check out of the hotel at around 14h30 and walk with my carry-on suitcase ten blocks south to 32nd street and then from there across to Penn Station.

From Penn Station there are regular and frequent trains to Jamaica. The journey takes about 30 minutes or so, depending on the train your travelling on.

From Jamaica I catch the JFK Air Train, a fully automated thing that stops at every terminal at JFK. The first stop coming from Jamaica is Terminal 1. I am departing from Terminal 7, which means I get the grand tour of the airport and some exceptional vistas. 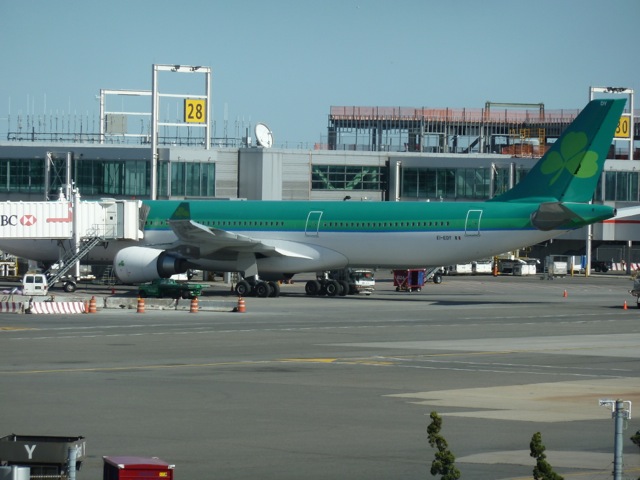 I even manage to get a close-up view of the legendary TWA terminal that is now part of the JetBlue operation in JFK. 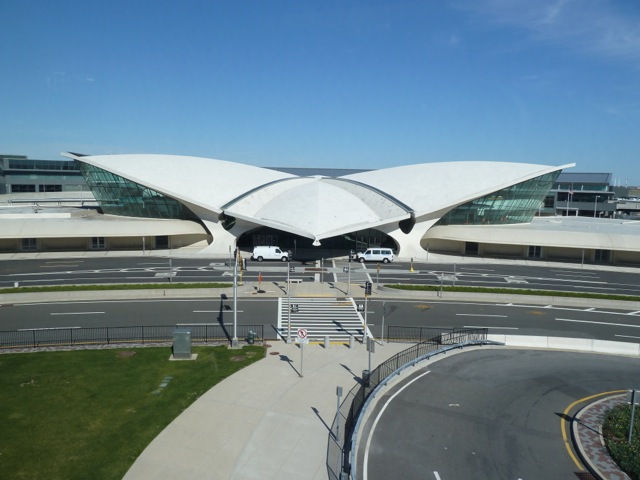 At Terminal 7 none of the British Airways self-service check-in devices appear to be working, so I queue for check-in with a human factor. And why not, the queue moves quickly and the check-in agent is nice enough and checks me in all the way through to Amsterdam. And yes, I have a seat on the upper deck. From check-in it’s a short walk over to security. The screening takes place in a narrow corridor with quite an inclination. Which is inconvenient to say the least. 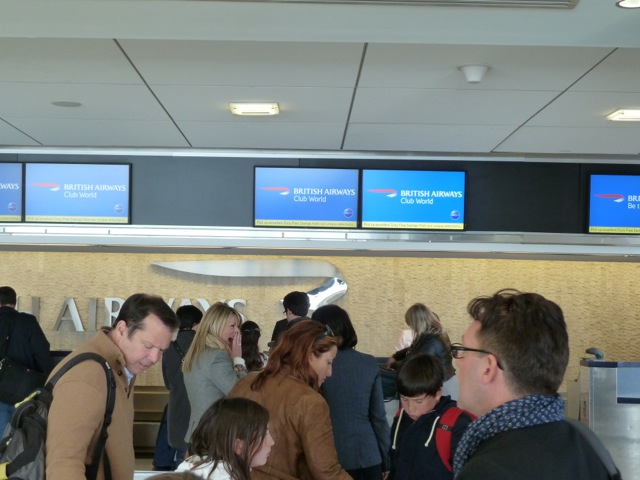 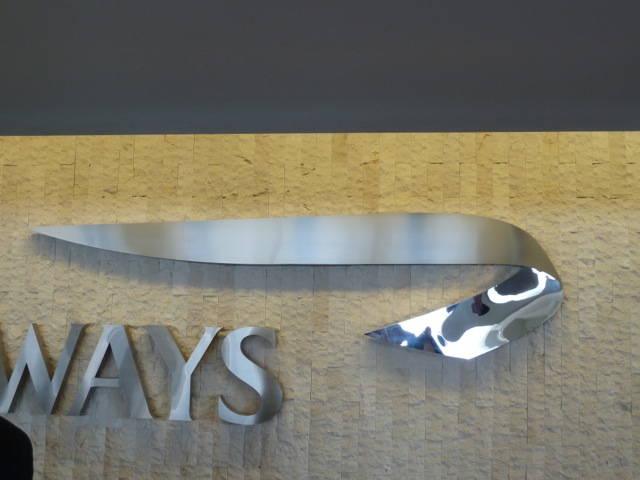 The British Airways Terraces lounge is enormous and rather full, which is also why I decide not to take any pictures.

The time passes quickly in the lounge and very soon I am heading down the gangway towards my aircraft. I’m greeted at the door and instructed to pass through the Business Cabin to the next galley and then from there up the stairs. When I reach the top, I am only the second person on the upper deck. The crew gives me a very warm welcome. And when they see me taking pictures, they ask me if I’d like to take one of ‘The BA girls’. Of course I do.

British Airways have an innovative seating concept in their wide-body Business Class in that the seats are grouped in pairs in opposing directions. On the main deck this means that they have as much as eight seats abreast. Nonetheless, there is enough personal space and there are privacy screens that can be raised to make sure you don’t have to sit through the whole flight looking at your neighbour’s ugly mug.

On the upper deck things are far more intimate, with only four seats abreast, two on either side. Due to the curvature of the jumbo’s hump, storage space on the upper deck is in abundance. 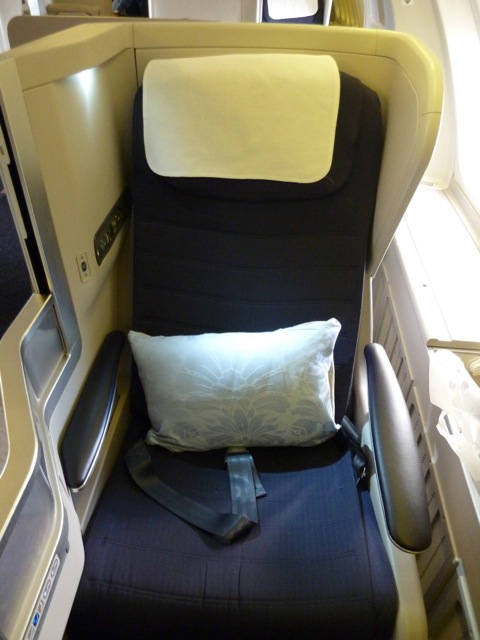 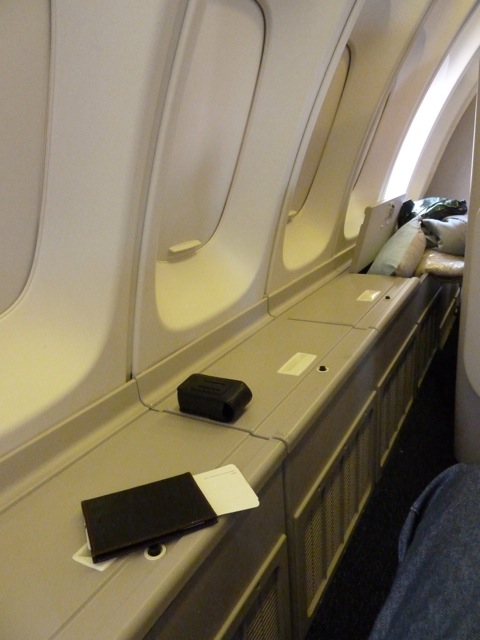 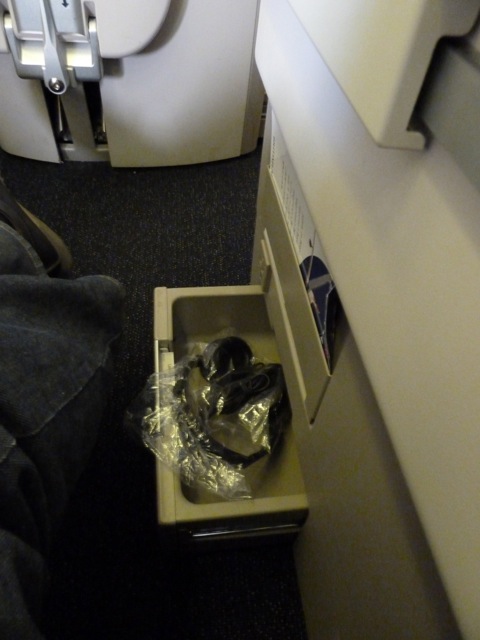 Service on the ground begins with the distribution of the menus, welcome drinks and amenity kits. They’re the same kind I got on the outbound flight (see my other British Airways post).

Take-off is obviously much louder and generally takes much longer than on The Speedbird One. Once we’re airborne though and settle into the cruise, the benefits of sitting on the upper deck become apparent and it’s quite amazing how silent it is up here. 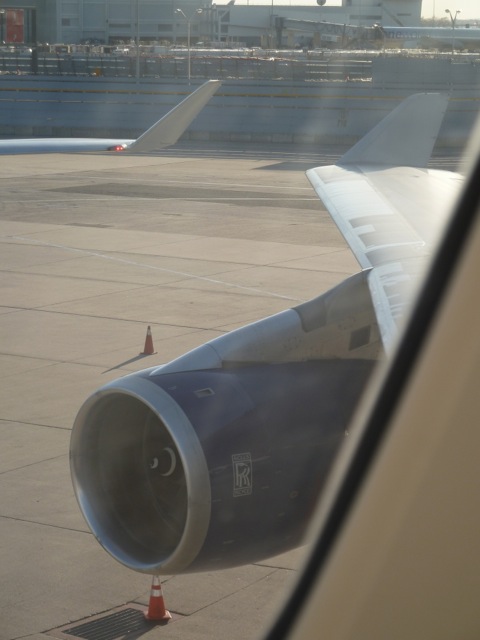 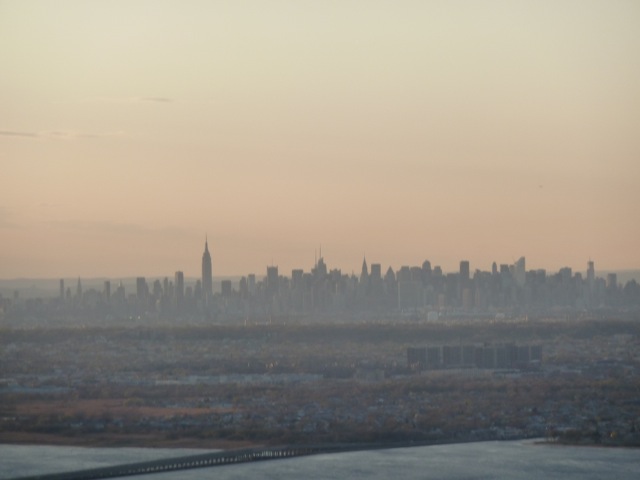 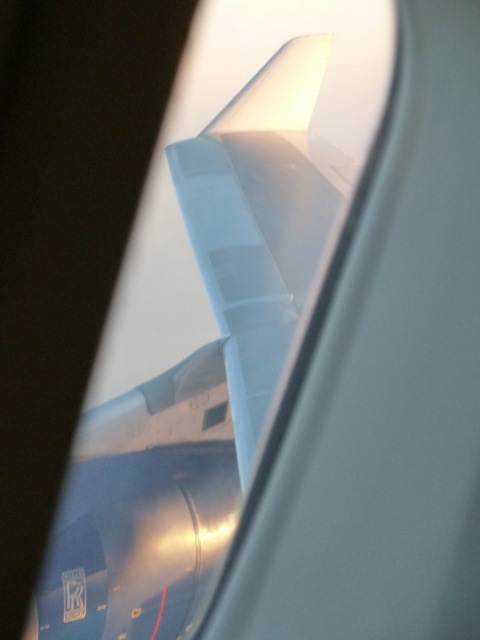 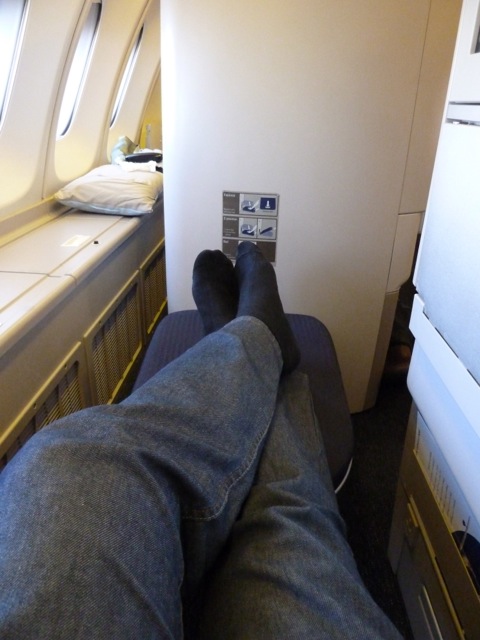 After take-off orders are taken for dinner. Then refreshment towels are served, followed by the drinks service with nuts. 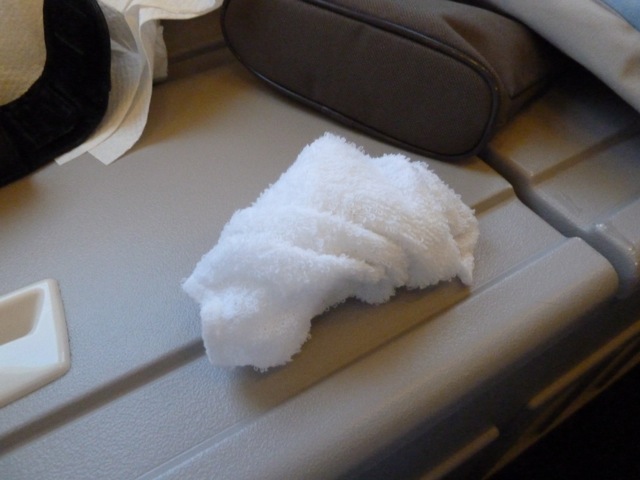 Service seems again very professional and efficient. There are no table cloths, as is the case with Swiss or Lufthansa for example. Also, in contrast to the Speedbird One, on this flight there is no choice for a starter. All passengers get the grilled bell peppers with asparagus and gorgonzola cheese on a bed of frisée salad. Simple but tasty.

For the main course there are three choices. The fish is already gone by the time the attendant reaches me, but the steak and the pasta are both still available and so I take the pasta.

Warm bread is served throughout the meal. 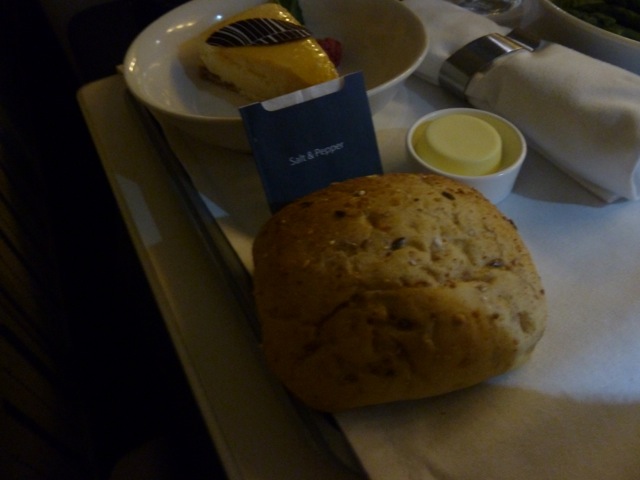 Dessert is a rather tasty lemongrass cheesecake.

And finally there is also a plate of cheese with grapes and Walker’s biscuits.

After the meal I start to watch a film, but very quickly my eyes start closing. So I extend the seat into the sleep position and doze off to beddiebye land. The mighty Jumbo gently rocks me to sleep to the comforting hum of the four Rolls-Royce engines pushing us across the Atlantic.

I awake as the bright cabin lights are switched on again ahead of the second service. There are no refreshing towels before this service. But the offerings are adequate and sufficient, it’s a continental breakfast served with coffee and a smoothie. My only complaint is that the presentation of the fruit in a plastic cup is not particularly attractive.

The meal is perfectly timed and just as the trays are removed, Jumbo starts to slow down and shortly after dips his nose into the murky skies above London. Arrival is some twenty minutes ahead of schedule. 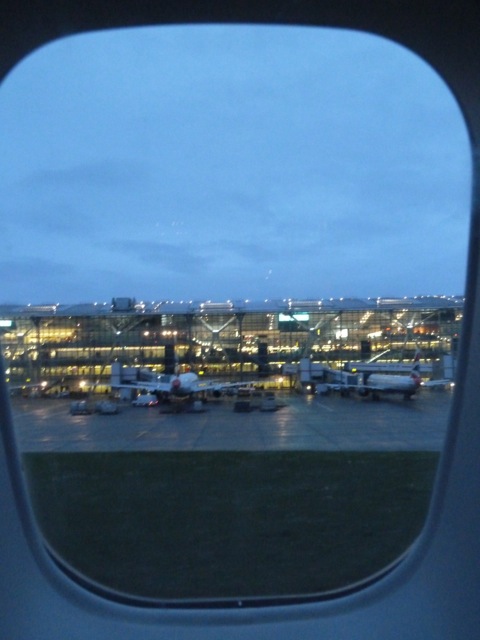 We park at satellite B, from where it’s a long trek up and down various escalators. There is a fast track through security for Business Class passengers, which is surprisingly efficient, especially seeing as we are, after all, in England. And very soon I find myself in the southern Terraces Lounge waiting for my onward connection to Amsterdam. 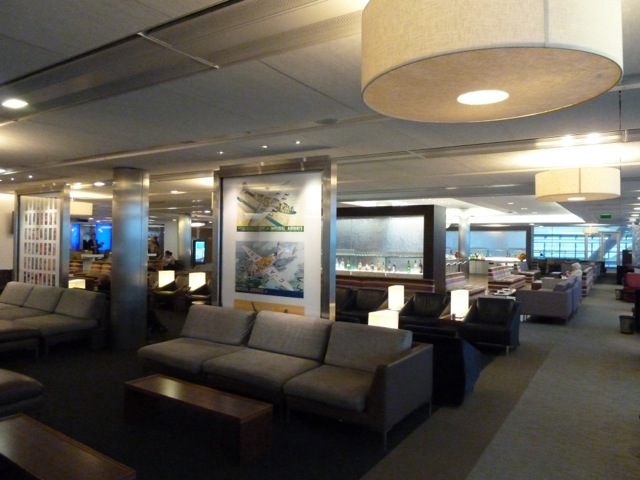 I like British Airways, I like the brand: from the livery of the aircraft to the cabin design and the very distinctly British touch of their service. I am also quite impressed with their operation. With my aircraft there were another three B 747-400s parked at JFK’s Terminal 7 and all of them would be leaving for Heathrow that evening, some of them was as little as thirty minutes between them. Heathrow may be pretty bad for congestion but Terminal 5, which British Airways calls home, is very pleasant. It has an open, spacious feel about it and distances are manageable. And I don’t think I’ve ever seen such a high density of B 747-400s lined up next to each other – it’s quite a sight to behold.

I was rather tired by the time I boarded my flight to Amsterdam. So the last segment is not covered. But my spirits lifted after take-off when the smell of an English breakfast started wafting through the cabin…

As for The Speedbird One, I think British Airways has done an outstanding job and put a lot of effort into resurrecting something of what was special about travelling on Concorde. And indeed, the service is special. The seat, although housed in the much smaller A 318, is much more spacious than that in standard Club World as I experienced it on Jumbo. The brief stop in Shannon is much shorter than I expected. And that is a good thing, because Shannon airport is a drab, smelly old place.

And then I also visited the Intrepid and was finally able to step aboard Concorde to stifle, at long last, that curiosity that has been nagging at me ever since my childhood, about what Concorde looked like inside in the real world. I know now and I am content. At the same time though, having now spent a lot more time with Concorde and researching about her biography, it saddens me that she no longer flies and probably never again will. In all likelihood it will be another twenty years before the technology is available to make supersonic flights a viable option for the airlines once more.

A few weeks back I chanced to make the acquaintance of a man who was on the development team of Concorde, and I consider myself privileged for that. What this man and his colleagues achieved is an outstanding feat of engineering. This trip is a salute to all those people who were involved in the development of this excellent machine – an aircraft called Concorde.