I arrive in Brussels on a flight from London Heathrow. It is just gone 13h30 and my connecting flight to Basel will not be boarding before 16h40.

The path from the arrival gate to security is pretty straightforward. My boarding pass for the onward connection was already issued in London.

There is a bit of a queue at security, given that there is only one lane open. But the queue moves quickly. And soon enough I am through security and Schengen immigration and find myself airside again.

Schengen flights leave from the A dock, which used to be connected to the main terminal via an underground walkway. Since I was last here, the underground passage has been closed off, and instead a bridge has been built in its place to connect the dock. Generally speaking, Brussels airport is very generously laid out and the high ceilings somehow prevent the place from ever being loud.

Location: At the beginning of the A dock, where it is connected to the bridge to the main building.
Type of Lounge: The Loft – Brussels Airlines Business Class lounge.
Facilities: Nap boxes, showers, toilets, video games, portable devices that can be borrowed from reception, newspapers and magazines.
Catering: Wow! There is a separate bar that is attended, where you can order drinks. The food options are excellent and very tasty. There is soup, a tray with different types of quiche, fresh bread and a buffet with salads and desserts. And, most importantly, they also have fresh Belgian waffles!
Internet: Complimentary wifi is available.

Blimey, this is certainly one of the nicer Star Alliance lounges I have been to in a while. The design of the lounge is very elegant in an understated way that makes it feel very comfortable and cosy. 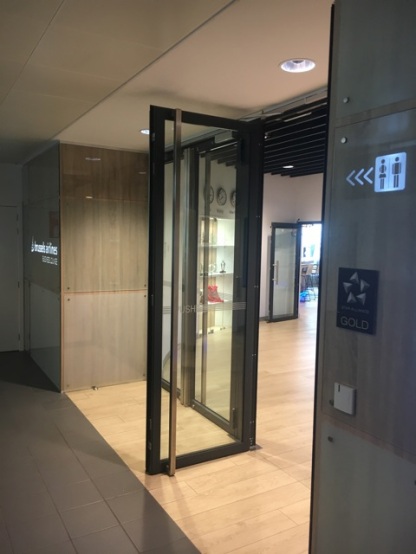 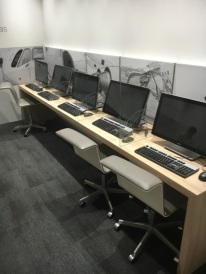 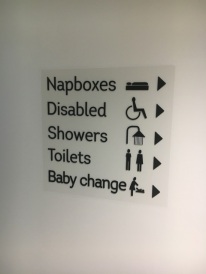 Half an hour before departure I exit the lounge and head for my departure gate. I really would like to know just how on earth they manage to get and keep the floor in the terminal looking so shiny with all the passengers stomping around on it all day? 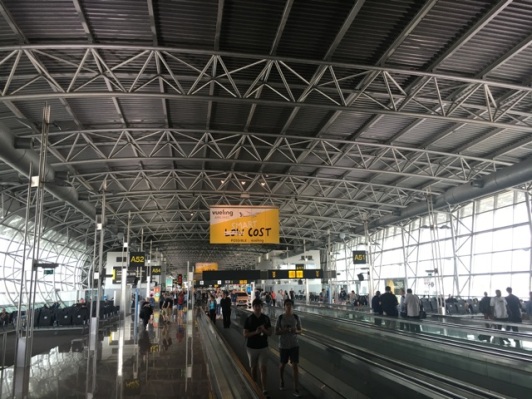 Our aircraft is parked on a contact stand, but the airbridge has not been connected to the aircraft, which means better photo opportunities for me! 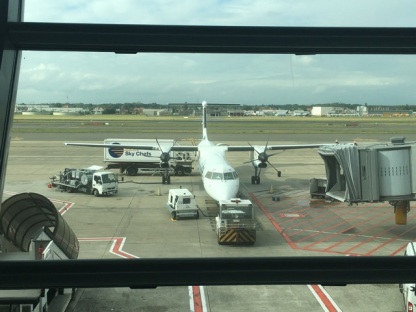 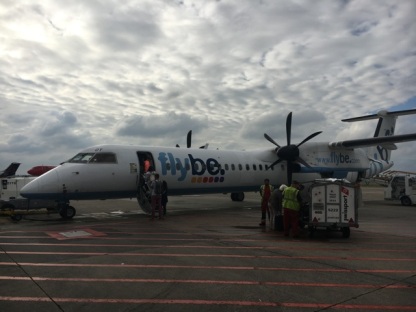 Configuration: 2 + 2.
Seat: No information could be obtained on the cabin layout and the seat’s dimensions. Basically, the aircraft is decked out in what seems to be the standard seat for the Q400, which is comfortable enough for such a short flight. In fact, the seat pitch is rather good. The only problem is that there does not seem to be any air conditioning on the ground and this aircraft must have been standing around all day, because it is stiflingly hot in the cabin. Other than that, the cabin lights are switched to mood lighting, which is kind of funky on such a little airplane.
Facilities: Reading lamp and air vent.

There are two young men working the cabin. The purser working the forward cabin seems friendly and obviously takes safety very seriously, which is the way it should be. Other than that through, interaction with the crew is fairly limited.

This is perhaps the most surprising part of the flight. From what I could tell on the previous leg from London to Brussels, passengers in Economy were served a sandwich and a drink. On this flight however, absolutely everything is buy on board. Otherwise you do not get anything, not even a cup of water. Nada. I mean, it hardly makes a difference with a flight time of only 45 minutes, but it just seems odd to serve nothing at all.

It says in the buy on board menu that if you are connecting from a long-haul flight you will be served a soft drink free of charge upon presenting your boarding pass of that flight.

Soon enough we land in Basel. The airport is on French territory. France is still in a state of emergency. As a result, the Schengen treaty appears to have been temporarily suspended and even intra-European flights now have to use the non-Schengen part of the terminal, which is bursting at the seems. It also means that you must go through passport control upon arrival.