In Malta I usually stay at the Phoenicia. This time however, I had to make different arrangements because the hotel is currently under renovation, refurbishment and expansion. Of course there are plenty of hotels in Malta, but I wanted to stay in Valletta. First of all, because there are plenty of things to do and see in Valletta and there are many good restaurants. And secondly, because it is fairly easy to access any place on the island by bus from Valletta.

And so I stumbled upon 10 Strait Street via Air BnB. I was in flat 1, which is fairly large, and with two bedrooms each with a double bed. The location of 10 Strait Street could hardly be any better. Strada Stretta, as Strait Street used to be called, has a long history and is located just a stone’s throw away from all the interesting sights like the Upper Barrakka Gardens and St. John’s co-cathedral.

Especially if you are planning a long stay on the Maltese islands, I think 10 Strait Street may be a viable and far more pleasant option than a hotel.

And here’s the link to the website. Bookings must be made via Air BnB though. 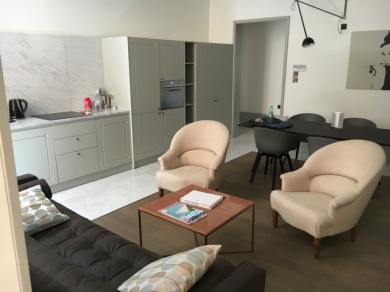 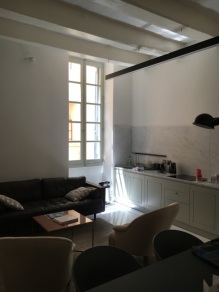 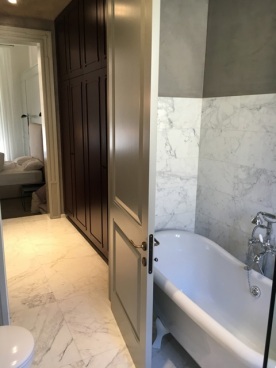 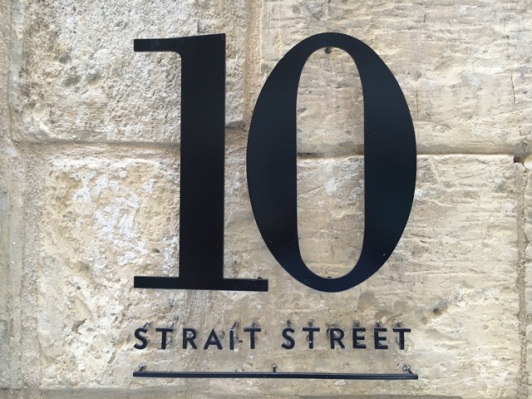 At ten o’clock in the morning the office workers, bureaucrats, politicians, shoppers and large tour groups congregate at Café Cordina’s in Valletta for a mid-morning cappuccino and pastizzi.

The service at Cordina’s is notoriously slow and notoriously indifferent. The bad service lends the place a certain distinction. And then there’s also the pigeons. Perhaps I ought to warn you. If you don’t like birds, you may want to keep away. Inevitably, with such a large seating area outside the actual café in the square in front of the library, Cordina’s is usually crawling – literally – with disease-infested, scrawny-looking pigeons. It’s quite alright as long as they’re just scavenging for food between your feet or under your chair. But the buggers have become so accustomed to human beings that they’re quite fearless and have no qualms at all about getting on the table and picking at the food on your plate.

But despite all of this, there must be only few places on this planet that provide such an excellent vantage point for heavy duty people watching. To sit there under the stern and watchful eyes of the Queen Victoria statue, watching the world go by, is quite simply priceless. They really do come in all shapes and sizes and all of them file past Cordina’s at some point.

My favourite ones to watch are the droves of young people on a guided tour of Valletta, organised by the many English language schools in Malta. To be honest, I very much doubt if any of the young ones really come to Malta to improve their English. I certainly wouldn’t. Most of them, I suspect, see it as a convenient way of letting their parents down gently, by going off to Malta for some fun in the sun under the pretence of wanting to enhance their academic potential to the fullest. At least that’s the impression they give you as you watch them shuffling past. The tour guide up front stops at regular intervals to explain this and point out that while in the back, the young ones are obviously more interested in surreptitiously ogling the members of the opposite sex in their group instead of hearing about Napoleon’s ignominious visit to the Maltese islands.

Personally, I think the best time to visit Valletta is in the late afternoon, preferably after five o’clock, by which time the large tour groups from the cruise ships ‘doing’ the Med have scurried aboard again and the language school students are sprawled on some beach recuperating from the morning’s culture onslaught while their hormones run riot.

But I digress. Valletta in the evening is a much nicer, quieter and more authentic experience. In the afternoons Valletta belongs to the Maltese again. The pace of the city becomes much slower, more laidback.

Valletta is not pretty in the traditional picture postcard, ideal for tourists kind of way. The city is old and traces its history to the sixteenth century, when the previous settlement was fortified  to be prepared for another attack by the Ottoman empire – an attack which never came.

Valletta is not only old, in some places it’s quite simply grubby and dilapidated – which makes it kind of hard to explain wherein the attraction lies. I don’t think I could say.

This is what used to be known as Kingsway. But that changed and when the Brits left and Malta became independent it was renamed to Republic Street. Even so, in Maltese it is still referred to as Strada Rjali – Kingsway. 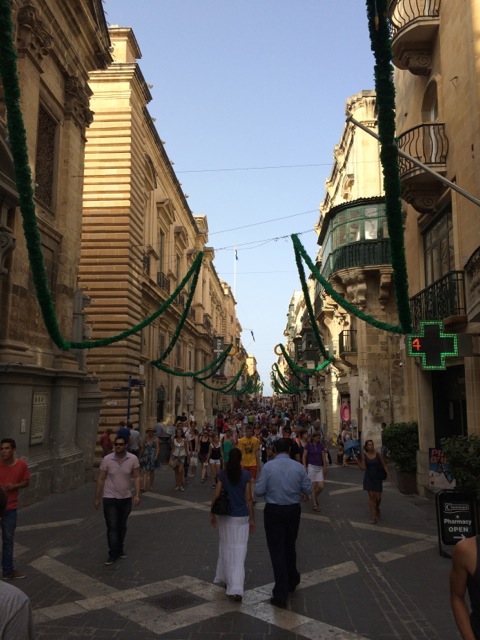 If you’re feeling hungry and want something sweet, I can highly recommend Camilleri’s on Merchant Street. They have a huge selection of freshly made Maltese pastries, like kannoli. A kannol is a piece of pastry rolled up and filled with sweet ricotta cheese. The one you can see here is with a rich chocolate cream which – while perhaps not quite so traditional – is still very tasty.

Have you ever wondered how the models they use for those wonder bra adverts are in real life probably the most unlikely persons ever to need a wonder bra to enhance? 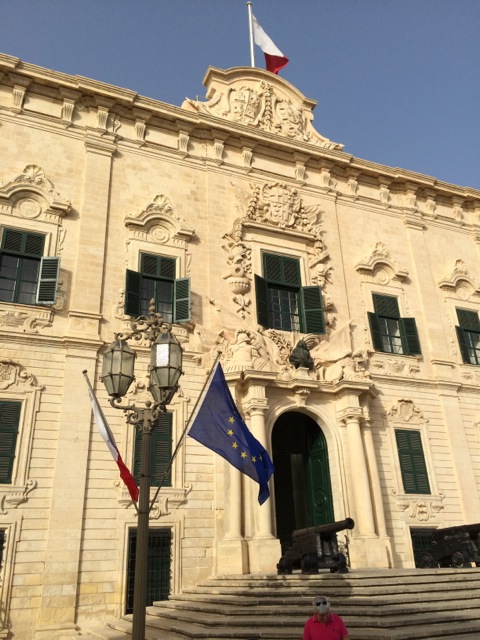 For the best views of the Grand Harbour and the three cities across the water head for the Upper Baraka Gardens. Don’t let the smell of horse piss by the gates put you off. The gardens are very nice inside and the view is spectacular. 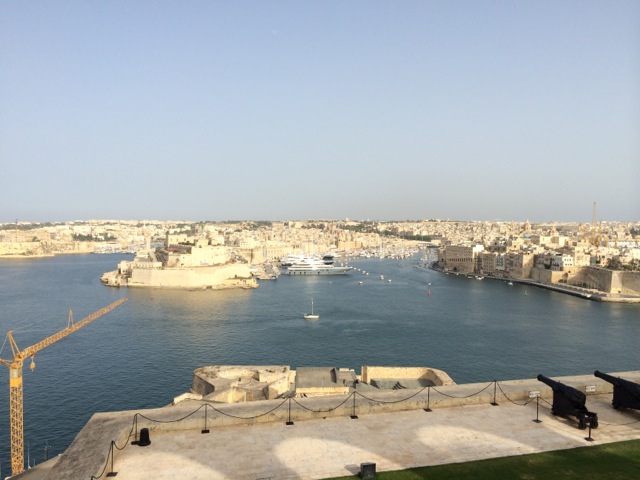 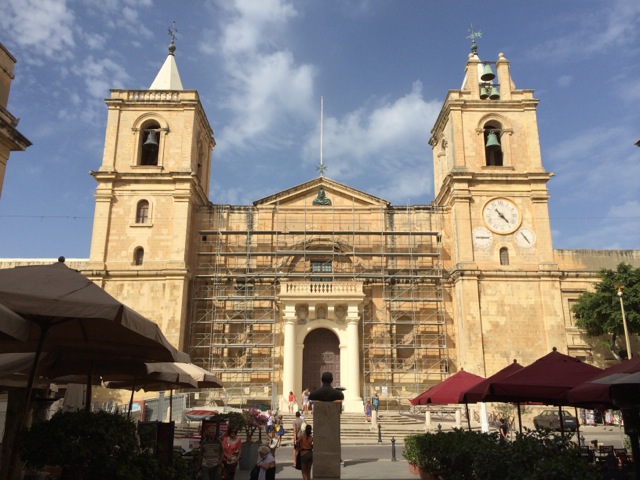 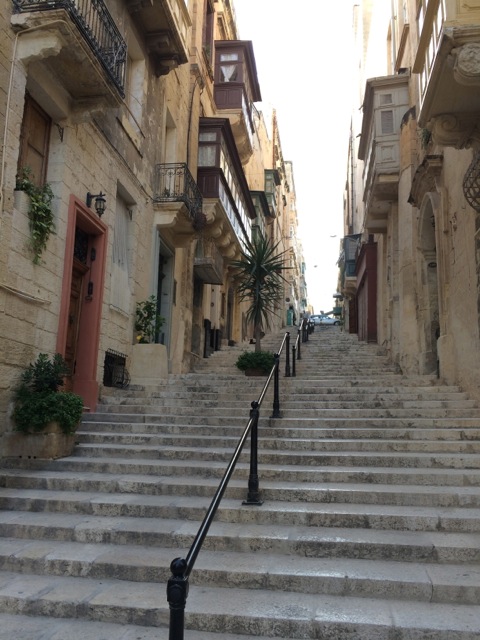 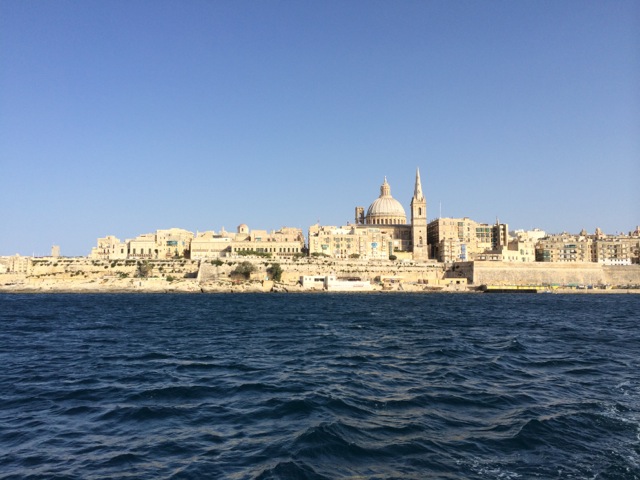 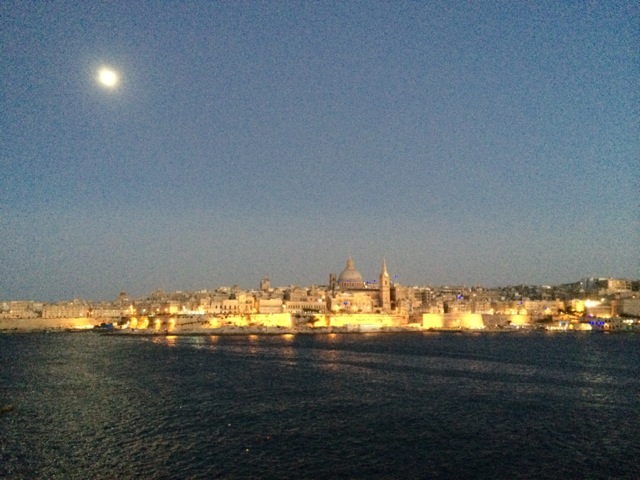