GETTING TO THE AIRPORT
My flight to Ljubljana will be departing at 15h05. So I leave the office at 13h40 to catch the 13h55 train from Winterthur, which should get me into Zürich airport at around 14h10, leaving me fifty minutes to reach the gate.

CHECK-IN
I already checked in for the flight the evening before using the Adria Airways app. I think this must be a Star Alliance or a Miles & More thing, because like SWISS, the Adria Airways boarding passes do not show up on the locked screen of my iPhone, even though I have them saved to the Passbook wallet.

AIRSIDE
It’s only once I reach security that I realise I may be cutting it a bit fine arriving at the airport less than an hour before departure, because the queue for the security checkpoint is long and nasty. Luckily, just a short while after I reach the tail end of the queue, they open up the lower level security area, which at least speeds up the process.

Because I’m running rather late and I still need to get something from the duty free, I don’t have time to visit the refurbished and recently reopened SWISS lounge. Instead, by the time I’m ejected from the duty free store, it’s time for me to head to gate A 56, the boarding gate for today’s flight. Gate A 56 is located in a provisional building that was erected many years ago but which they then ‘forgot’ to tear down. A 56 is a bus gate and it’s not a particularly nice area of the terminal.

BOARDING
The same gate agent is manning the gate today as I had a month ago when I flew to Macedonia via Ljubljana. She’s not particularly friendly, and I’m kind of surprised myself that I even remember her.

I’m on the first bus to the aircraft. There’s a bit of a hold up once we get to the aircraft, because apparently they’re still refuelling. But eventually, just as the second bus arrives, we are finally allowed to board.

THE CABIN
I really, really don’t like the CRJ-900. It’s such an unpleasant little aircraft. Once you’re actually seated, it’s not that bad. Adria Airways has a pretty decent seat pitch on these aircraft and they also still have these old school seats that have good padding.

But the cabin is very tight, narrow and cramped. Of course it also doesn’t help that today’s flight is quite full, which gives even more of an impression of the cabin being crowded.

I’ve decided to sit on 18A today, which means that for a change I’m seated behind the wing and will be able to watch the various surfaces of the wing move during the flight.

SERVICE
The service on today’s flight is done by two female cabin crew. I think they’re really brilliant. They’re very chic. And both of them are friendly and enthusiastic about their job and their interaction with the passengers is polite, relaxed and unrushed.

The captain comes on the loudspeaker to welcome us on the flight and informs us that we will have to wait another forty minutes before we’ll be allowed to start the engines. Something about congested airspace over Austria and thunderstorms in the Zürich area… Before he’s even finished the announcement, the crew are already passing through the cabin offering complimentary cups of water to passengers, which is a nice touch.

Eventually, we depart with a delay of 45 minutes. The flight time is announced at fifty minutes.

THE MEAL
On Adria Airways water is complimentary in Economy Class. In addition, there is also a selection of items that can be purchased from the buy on board menu. In the name of scientific research and progress, I decide to order a Coke Zero and a cheese sandwich, which will set you back EUR5.- and which is quite decent, I think. What’s more, the sandwich is very tasty! It’s filled with ruccola, nice bread spread and some sort of lovely smoked cheese.

The flight passes quickly. This is my idea of bliss. Sitting on an aeroplane flying through unsettled weather, with decent food and watching the world go by beneath me.

ARRIVAL
Eventually we land with a delay of slightly more than one hour. The approach is very bumpy and quite rough. In the distance I can see dark storm clouds looming on the horizon.

To get into town from Ljubljana you have a number of options:

There is the bus, which will take you to the railway station. This takes about fifty minutes to make the journey and will cost EUR4.-. The bus only runs every hour on the hour.

Then there is also the shuttle service, which will drop you off anywhere in the city. The price is EUR9.- and the shuttle will only leave once there are at least five passengers. The journey into town will take about thirty minutes.

And then there is the taxi, which also takes about thirty minutes but will cost you EUR50.-. 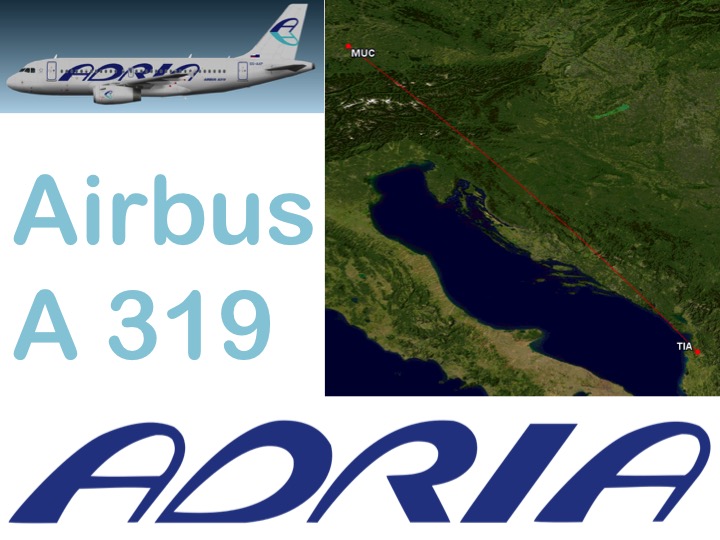 The Albanian authorities have been excellent hosts. In addition, the weather in Tirana today was quite simply stunning. The temperature was pleasantly warm, with a nice breeze preventing it from getting too hot. The dramatic location of the city, surrounded by mountains, is quite spectacular and with the clear air, the mountains look close enough to touch.

The user group meeting comes to an end at 15h30. By the time I finish saying goodbye to every one and pack up my things, it is already four o’clock in the afternoon.

CHECK-IN
Location: Left half of the terminal, ground floor.
Facilities: Check-in counters for the Adria Airways flight open two hours before departure. Counters 17 and 18 are reserved for Adria Airways check-in.

Alternatively, there are also multipurpose self-service check-in machines. The self-service machines are located facing the entrance to the terminal. They are red and can hardly be missed.

Once I get that out of the way, I step outside to have a coffee and watch the world go by in the warm sun. This is just lovely. 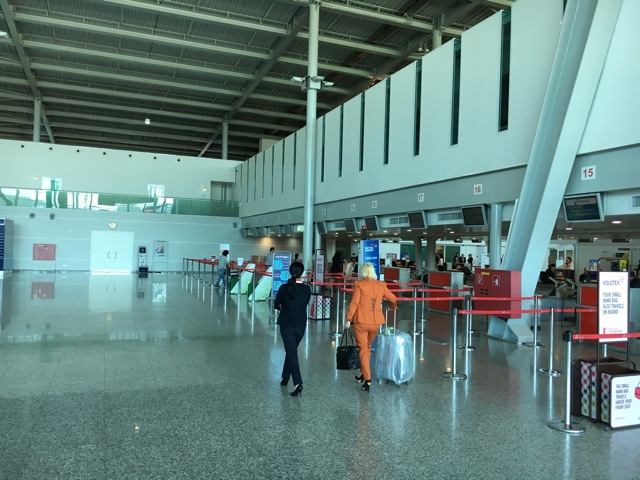 LOUNGE
Location: First floor, right behind immigration.
Type of Lounge: Multipurpose contractor lounge.
Facilities: A variety of different seating options, two Mac workstations, toilets are available in the lounge.
Catering: There is a small buffet with a small but good selection of snacks.
Internet: At reception an access code for the internet is printed for you. 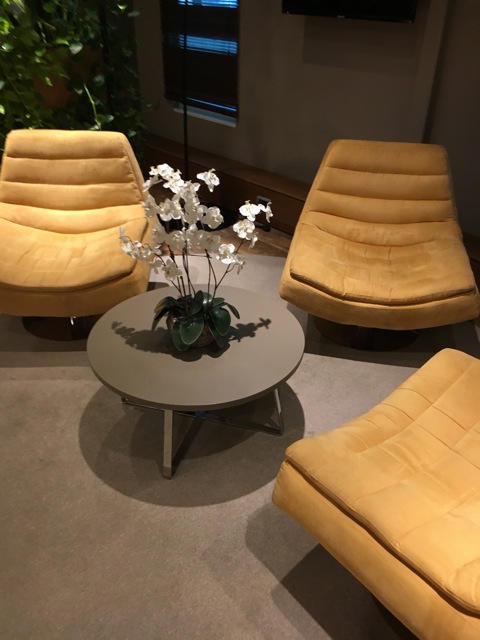 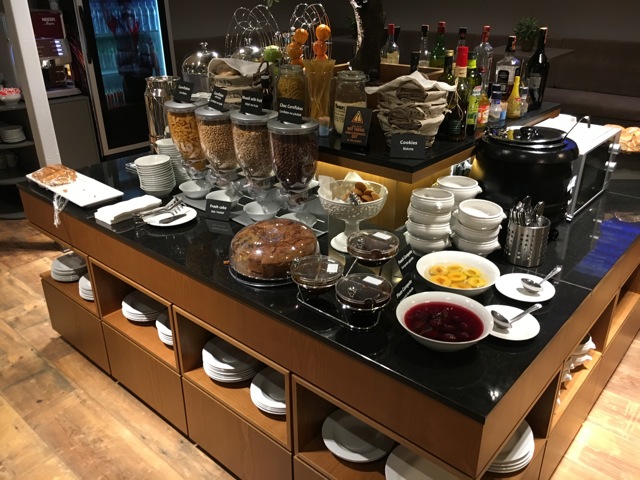 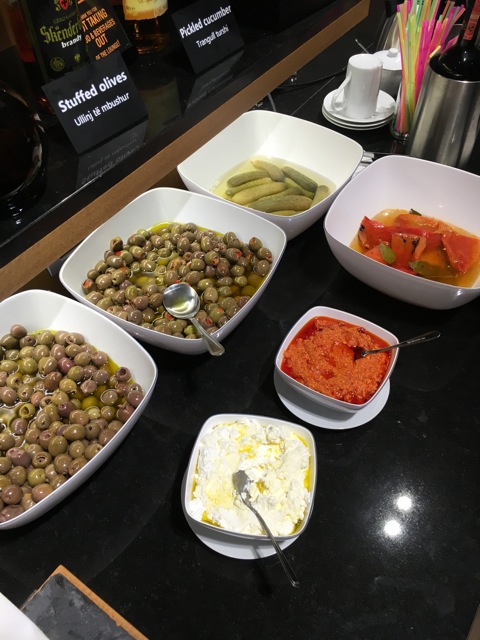 Access to the lounge is via a set of stairs hidden away behind the duty-free shops. The lounge is open to status cardholders of most airlines. Alternatively, you can also pay EUR20 to use the facility.

Like the rest of the airport, the lounge is fairly small. But I rather like the design. It feels cosy.

BOARDING
Priority Boarding: There is no priority boarding for this flight. However, given that there were only about forty passengers in total on the flight, it does not really matter that much. 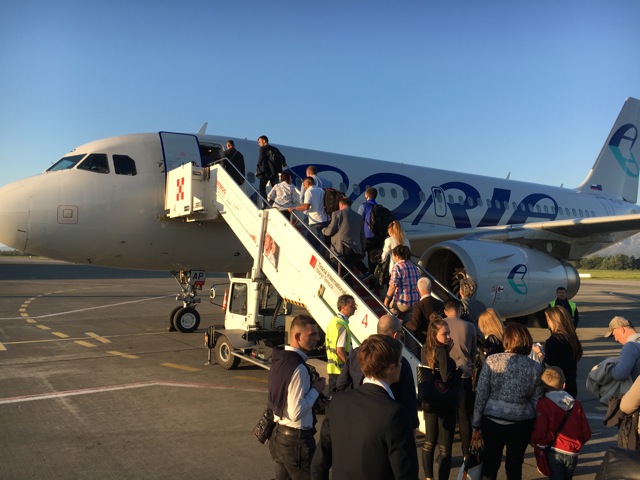 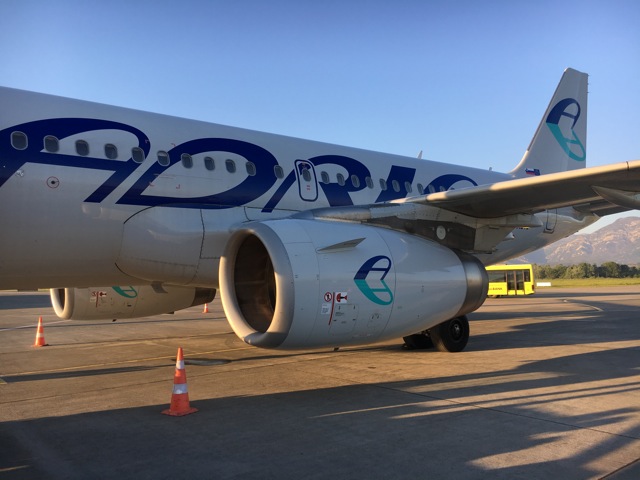 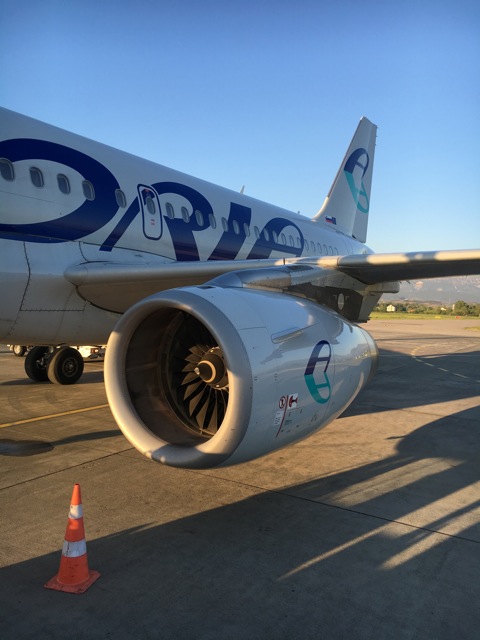 CABIN
Configuration: 3 + 3
Seat: 9A, window on the port side of the vessel.
Pitch: No information.
Width: No information.
Description: Unfortunately, I was unable to find any useful information about the cabin configuration and seat of Adria Airways’ fleet of A 319s. The cabin looks nice enough and well maintained. However, the fact that everything is kept in various shades of grey does make the cabin look somewhat drab.

Other than that though, Adria has video screens installed throughout the aircraft and there is also internet connectivity available via OnAir, although I did not try it out on this flight.

Seating on this aircraft is fairly tight, but at lest the flight is only about a third full. Thus, I have a whole row to myself and manage to find a decently comfortable position to sit. 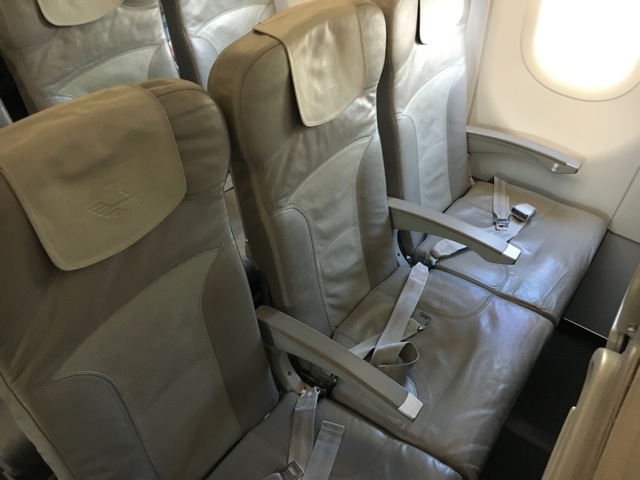 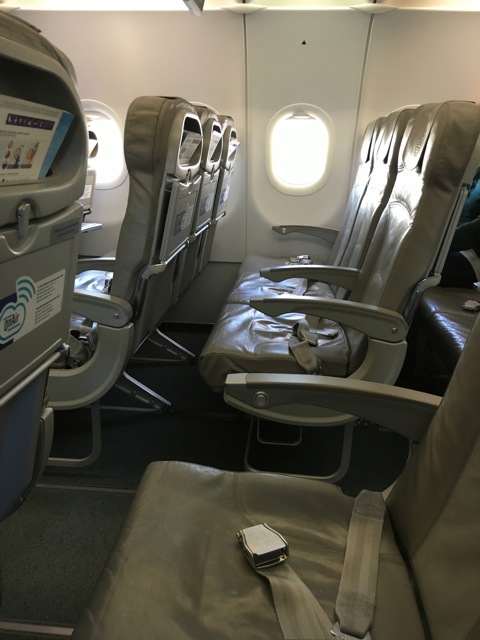 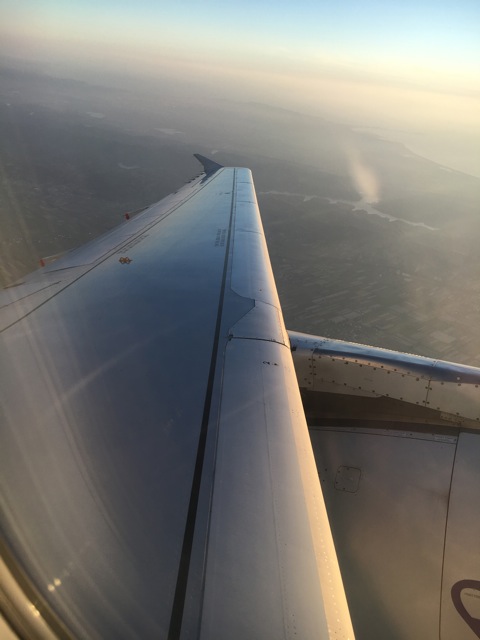 SERVICE
There are three cabin crew. The purser is a charming lady in her early fifties, I would guess. Announcements are made live in Albanian, Slovenian, English and in German. The crew is friendly enough and I notice that they rigorously enforce safety on board.

THE MEAL
All passengers are served a cup of still water. Other than that, food and drinks are available for purchase only. Mostly, it is just light snacks and drinks. But at least the prices are reasonable. I order a cheese sandwich, a Coke Zero and a Nescafe with milk and sugar for EUR8. 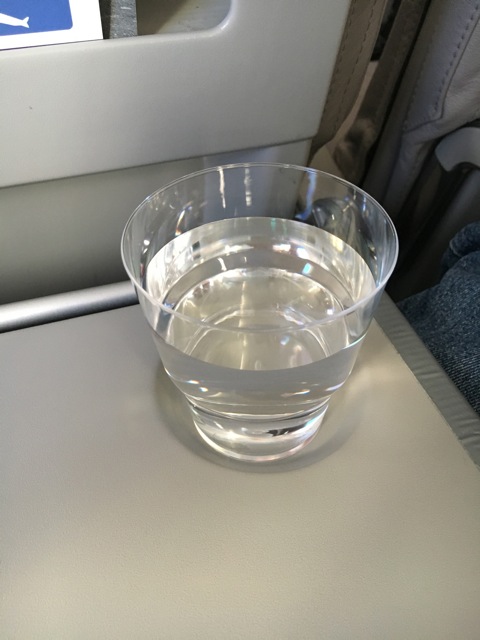 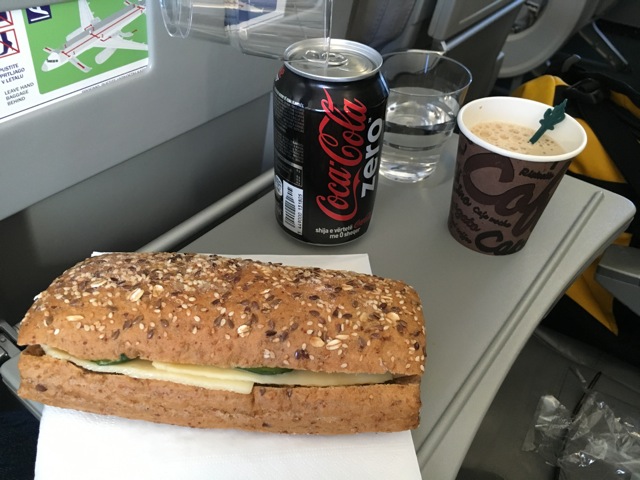 It is another glorious day for flying outside. After take-off, our routing takes us along the Adriatic coast on a north-westerly track until eventually the coastline gives way to the Alps and eventually we cross into Germany. 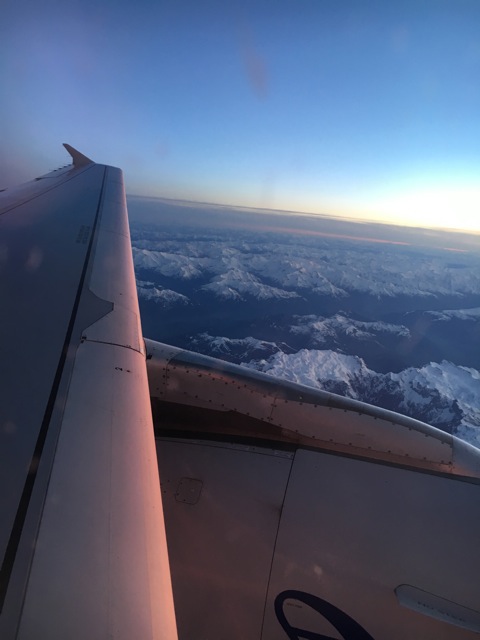 ARRIVAL
We land a few minutes ahead of schedule. It is quickly approaching 21h in the evening, so Munich airport is already fairly quiet. I pass through security and immigration and take the stairs up to the G concourse, which is the Schengen area, from where my connection to Basel will be leaving.

CONCLUSION
All in all I though, Adria Airways were not that bad at all. True, buy on board is never cool, but the quality of the food available was good and came at a decent price. The aircraft was comfortable enough, although much of that had to do with the fact that is was mostly empty. On a longer or full flight I am not sure how comfortable the experience would be.