INTRODUCTION
The city of Billund is best known as the location of Legoland. Apart from that though, Billund is definitely one of the stranger places I have ever visited. I am staying at the Refborg hotel, which is a nice hotel close to the bus stop for the bus to the airport – but otherwise stuck in the middle of nowhere. It is not until I make further investigations that what I thought originally was the middle of nowhere turns out to be the centre of downtown Billund… 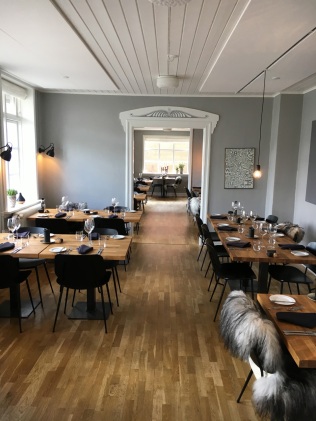 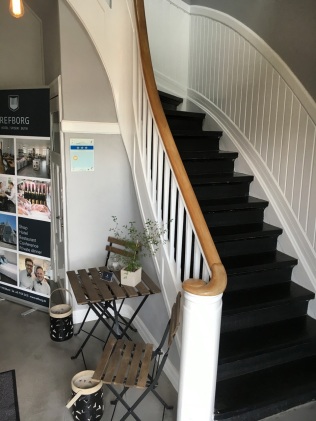 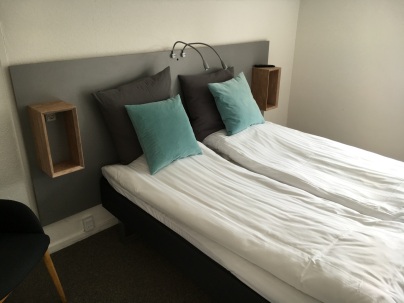 And now it is Sunday morning. It really is peaceful here. Lying in bed I can hear the birds singing and the soft, gentle hush of drizzle against the windowpane.

GETTING TO THE AIRPORT
Transport: Walk.
Journey time: 45 minutes.
From: Refborg Hotel, central Billund.
Arrives: Entrance to Departures.
Cost: 240 calories.
The distance from the Refborg Hotel to the airport terminal is only 3.84 kilometres, so I figure I might as well walk. The walk is pretty straightforward and takes you along country roads with very little traffic. I think this is the first time I have ever walked to the airport. The journey takes approximately 45 minutes for airplane geeks, walking at an average pace of 11:53 minutes per kilometre. Obviously this will be about five minutes or so shorter if you are not an airplane geek and hence do not stop to watch every time an aircraft takes off right above your head.

The walk from the city centre takes you around the grounds of Legoland and then in a straight line to the airport. On your way you will pass right under the threshold. 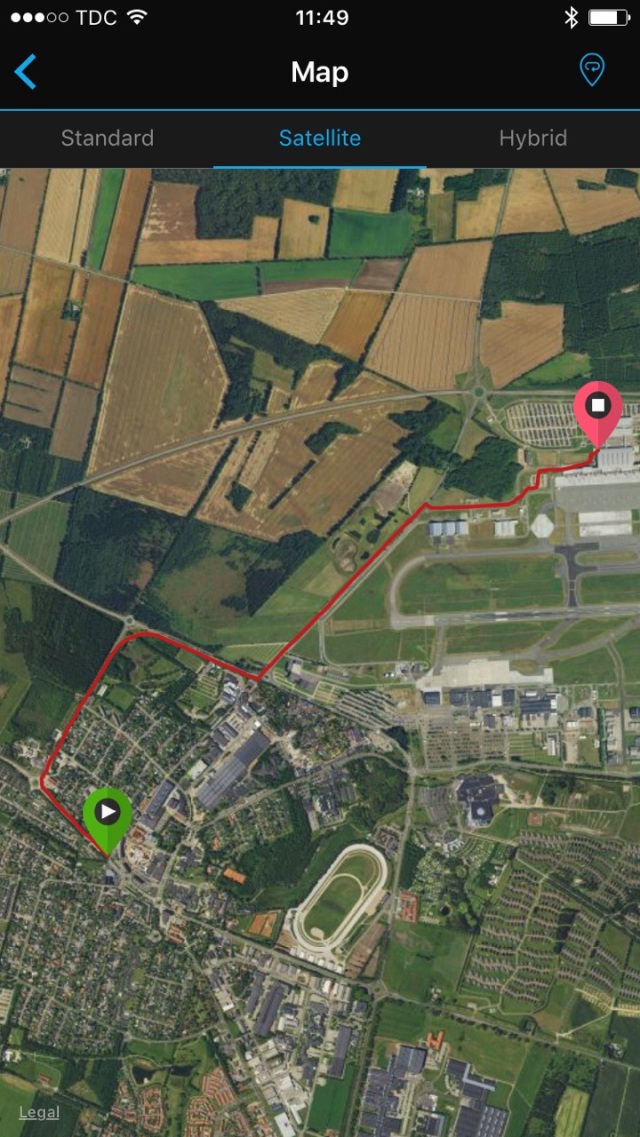 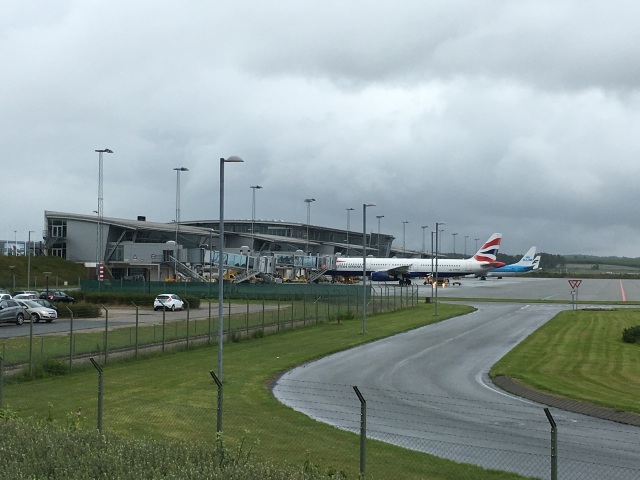 There is a LEGO store once you are airside of the terminal. They have a special set of Billund airport made out of LEGO, which was produced as a limited special edition of 10’000 and can only be purchased at this shop. Because it is a limited edition, customers are advised that the price per set will go up if they purchase more than three boxes. What’s more, the guy who actually designed the set still works at the shop and if you ask nicely, he will even sign the box for you! 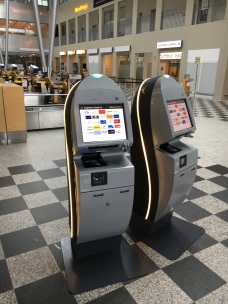 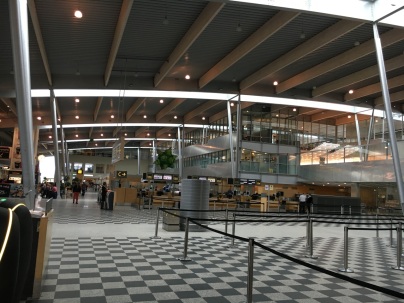 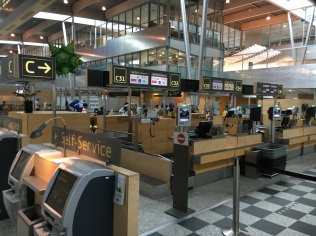 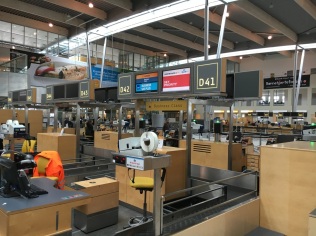 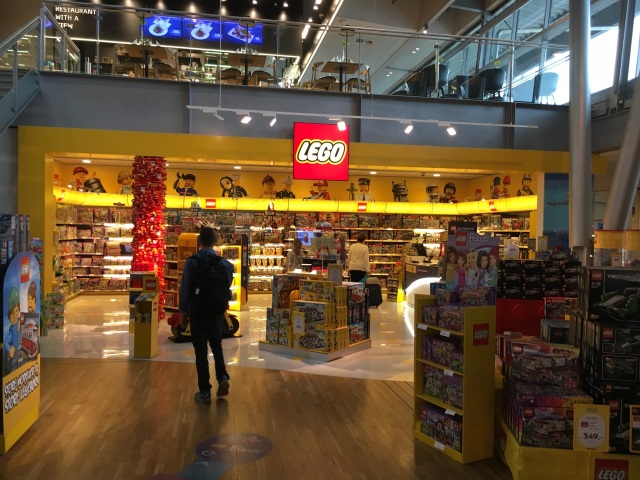 LOUNGE
Location: One floor up from the public transit area.
Type of Lounge: Contractor lounge operated by Billund airport.
Facilities: Toilets are available in the lounge but there are no shower, workstations.
Catering: The lounge has a decent selection of cold dishes and various breads. There is also a coffee available. Meals may be ordered for purchase in the lounge.
Internet: There is complimentary wifi in the entire terminal. However, the lounge has its own network.

The stairs leading up to the lounge are guarded by a man-sized king in medieval costume – made entirely of LEGO of course. 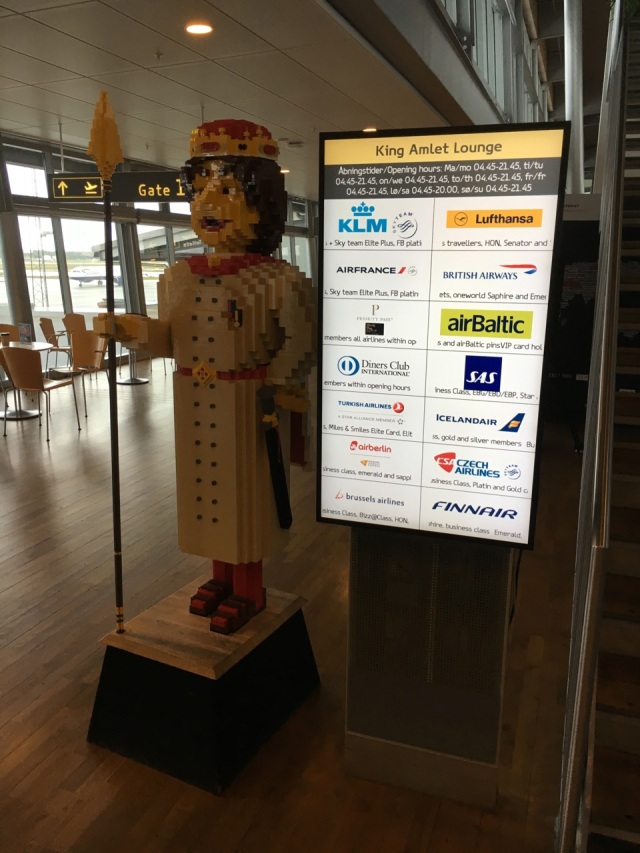 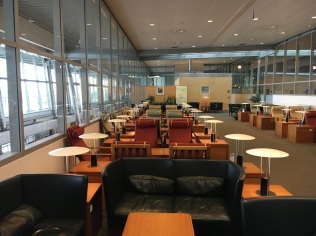 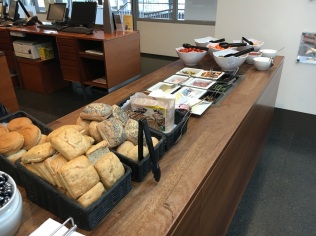 BOARDING
Priority Boarding: No.
Is there like some secret sign I missed or what? One moment I am just standing in the holding pen for my flight to Amsterdam minding my own business, the next moment all the passengers stand up and start walking towards the exit for the plane. 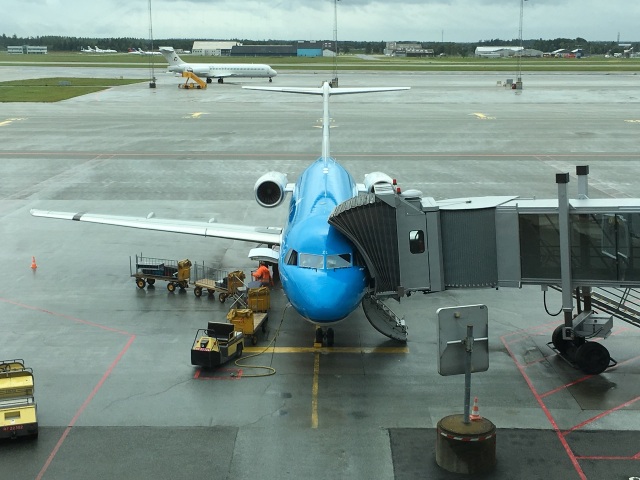 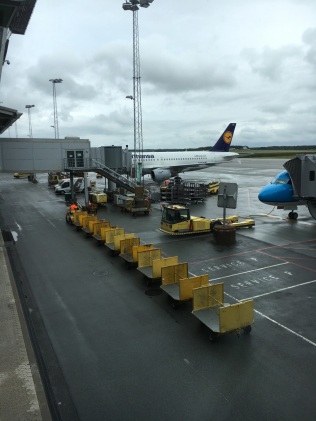 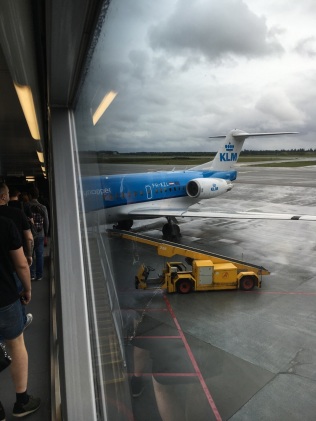 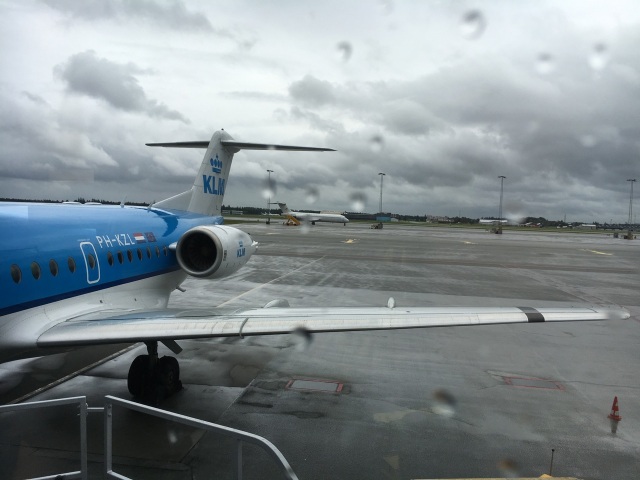 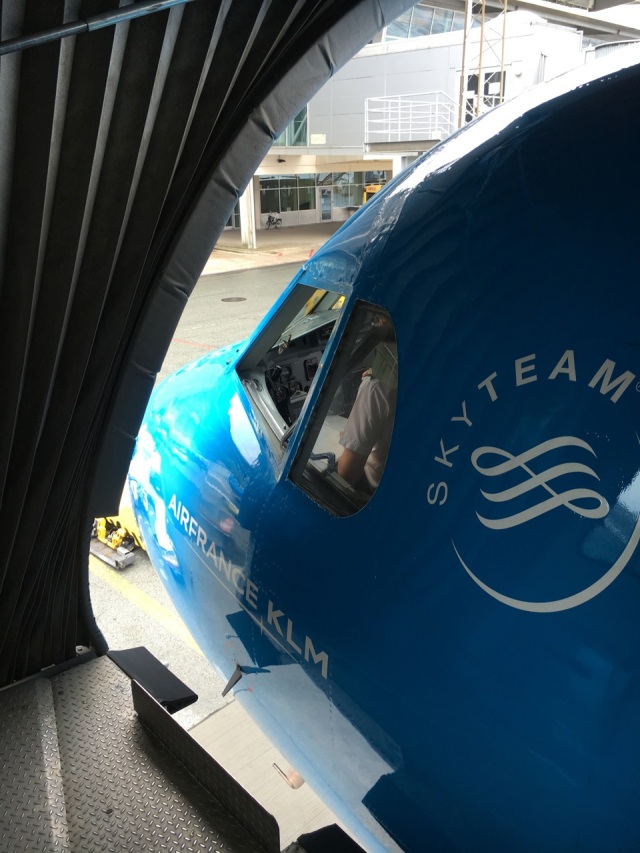 CABIN
The flight is only moderately full. Originally I am on seat 3C, which is the aisle seat on the port side of the aircraft. But once boarding is completed, I realise there is an entire row of three on the starboard side on row five, so I move to 5F before the fasten seatbelt sign comes on. 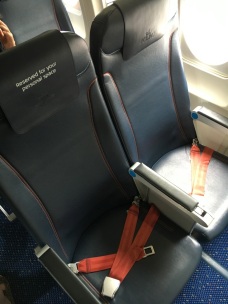 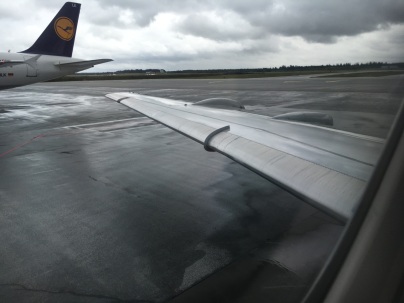 SERVICE
There are two female cabin crew on the flight. They are friendly enough, but they seem a bit stressed, probably because the inbound flight was late and the turnaround had to be very quick. 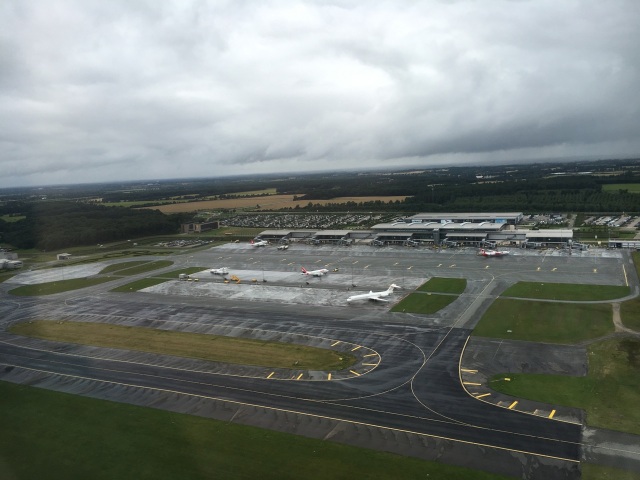 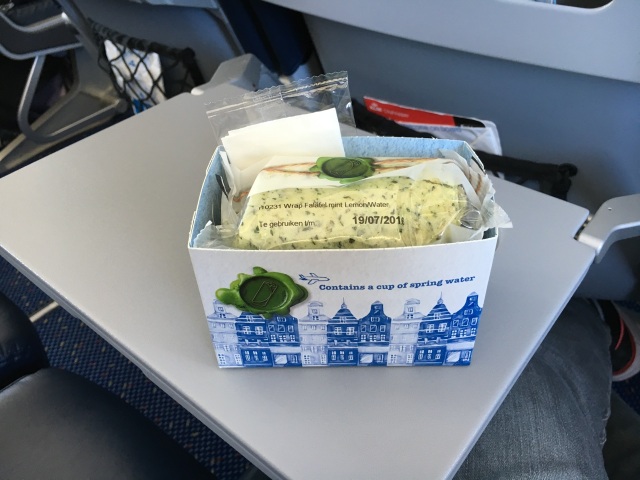 Much to my surprise, the food service on this short hop to Amsterdam is not the usual biscuits or crisps. Instead, we are each served a box containing a small wrap and a container with still water. Even so, the crew still pass through the cabin offering drinks from the trolley. 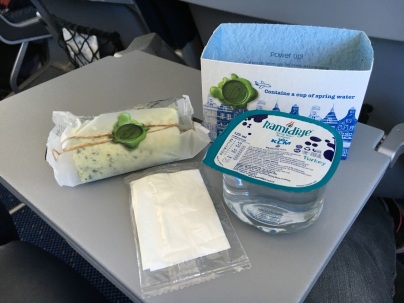 ARRIVAL
The weather in Amsterdam is certainly much better than it was in Billund, with only scattered clouds and a temperature of 22 degrees Celsius. We land on runway 18C, which means that we only have about 5 minutes to taxi from the runway to the infamous Fokker farm, where all the Cityhopper aircraft normally park. 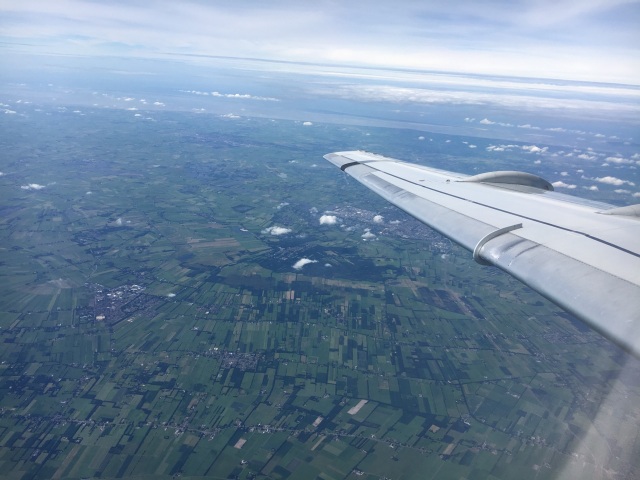 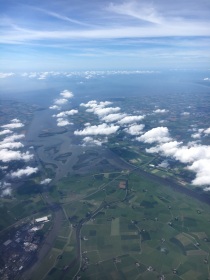 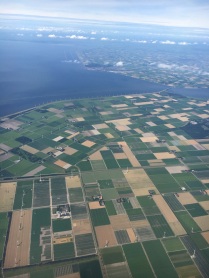 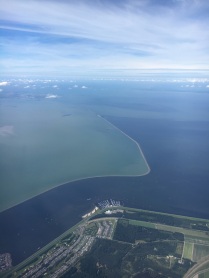 There is a bus to bring us to the terminal. I arrive in the terminal building at 15h50. I now have ten minutes before boarding starts for my flight to Basel. As my friend the valiant M. would say, it’s as easy as cutting Swiss cheese. 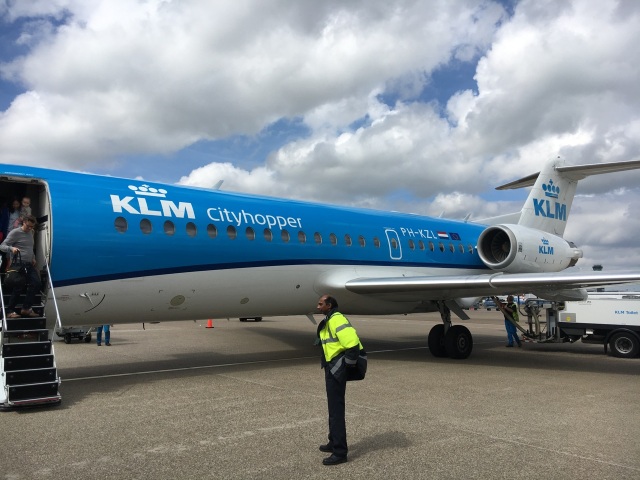