INTRODUCTION
Lugano airport is located in a narrow valley, closed in by steep hills on three sides. In addition, the lake just south of the airport puts further limitations on the length of the runway. As a result, even SWISS’ Avro RJ100 is still too large and too heavy to operate safely in and out of Lugano. For a while, service to and from Lugano were operated by Darwin on behalf of SWISS. But then once Darwin was rebranded as Etihad regional, there was no way the relationship could continue and eventually, the route was taken over by Austrian Airlines who operate the Q400 on the route.

And so I find myself on my way to Zürich early on a Sunday morning to catch an Austrian Airlines flight from Zürich to Lugano.

GETTING TO THE AIRPORT
Transport: Train.
Departure: 06h33 from Basel Main Station.
Arrival: 07h47 at Zürich Flughafen.
Journey time: 1 hour and 14 minutes, including the transfer at Zürich Main Station.

CHECK-IN
Facilities: Web check-in via the SWISS app. Check-in for the flight opens 24 hours before departure. Advanced seat reservation is possible against payment on the SWISS website or web app.

The Passbook app does not really work well for SWISS. The whole point about Passbook should be that the boarding pass appears on your lock screen. So that you only need to swipe the screen to display the pass, rather than having to type your PIN code each time. But for some reason that never seems to work with SWISS.

LOUNGE
Location: Upper level of the airside terminal.
Type of Lounge: SWISS and Star Alliance Business Class lounge operated by Swissport on behalf of SWISS.
Facilities: Toilets and showers, computer workstations, newspaper rack.
Catering: For a change, there is a fairly decent breakfast spread, with different types of bread, cold cuts, Müsli and a fruit salad.
Internet: Available in the lounge and in the terminal, courtesy of the airport authority.

At least for once the place is empty and looks fairly tidy. Two things strike me as I wolf down my croissant. First, the lounge is starting to look dated. SWISS’ branding has not really aged very well and what was once cool simplicity is starting to look worn and plain drab. And secondly, have the staff here actually received any training? None of them are actually doing anything. Instead, two of them are discussing a roster swap while the three Latinos are having a bit of an argument in Spanish about some guy who is, and they all agree here, a bit ‘tonto’ and a bit ‘loco’. Seriously? If it were not for them, the place would be nice and quiet… 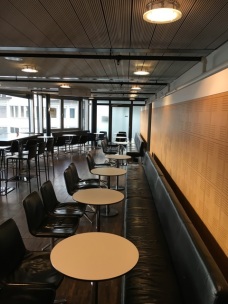 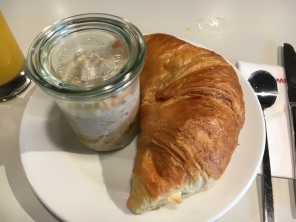 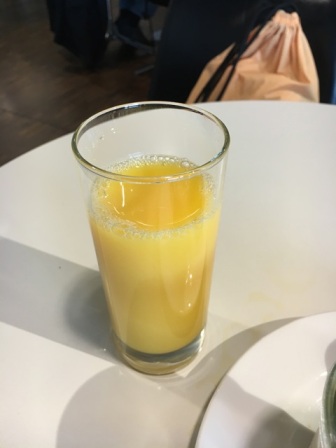 BOARDING
We are boarding from gate A55, which is a bus gate on the ground floor. I count 40 passengers on the bus, which is more than I had been expecting for such a flight on Sunday morning. 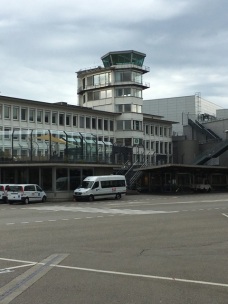 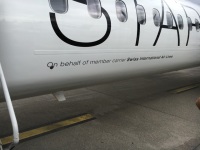 CABIN
Configuration: 2 + 2.
Seat: The Q400 has a seating capacity of 76 in Austrian Airlines’ configuration.
Pitch: 30 inches.
Width: 17 inches.
Facilities: None to mention really, but there is a coat hook.

Originally, I am on 15F, which is a window seat. But the guy next to me seems to be needing a lot of space, which is kind of strange considering he is not really such a big guy. But fortunately for me, there are still a few rows left empty by the time boarding is completed. And so I move forward to 9A, which is also a window seat. 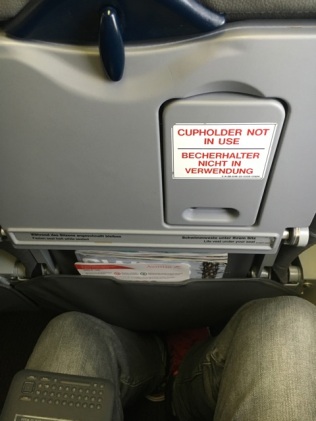 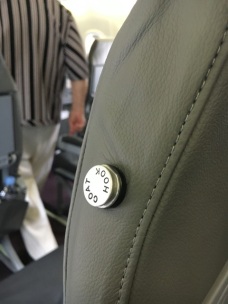 SERVICE
There are two cabin crew working the flight today. The flight is operated with Austrian Airlines crew, which is why the two ladies are dressed in that carrier’s rather trashy red uniform.

To be honest, I am rather surprised they serve anything at all, given that the flight time is only 30 minutes. But in any case, the chocolate hits the spot nicely. 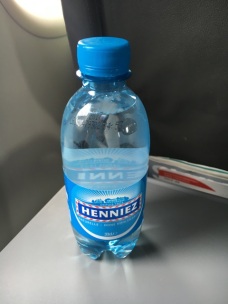 ARRIVAL
We fly a circuitous route around the mountains on our descent into Lugano. Eventually, we fly into the valley from the south, coming in over the lake. We then make a wide left hand turn to line up with the runway and land in a southerly direction.

‘Dinky’ is the best word I can think of to describe Lugano airport. It is just so small. It is probably one of the few airports I have ever been to where you can get the entire arrivals and departures areas in one shot. 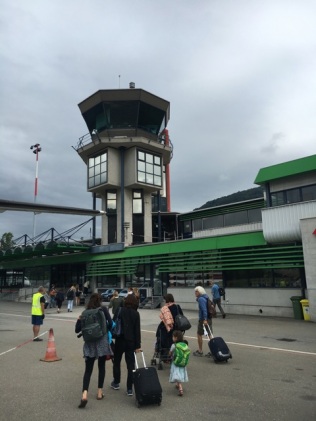