INTRODUCTION
Had I already mentioned it’s the monsoon season in Java? Goodness, I don’t think I’ve ever seen anything quite like this. No sooner have we left the hotel, the rain starts. This must be what they mean when people speak of the heavens opening. Within minutes the streets turn to rivers and it becomes nearly impossible to see anything up ahead of the car. I think it’s kind of atmospheric though, sitting in the comfort of the car with the rain pelting down on the roof as we drive through the rain drenched streets of Surabaya under a thunderous sky. And the Indonesians? To be honest, I think they hardly notice the rain. At least they all seem to be going about their business as usual – and their driving certainly hasn’t slowed down…

GETTING TO THE AIRPORT
My flight to Jakarta will be leaving at 18h00. Given how long it took me to get from the airport into Surabaya when I got here, I arrange for the car to pick me up from the Majapahit at 15h00. Of course I hadn’t considered that this being Friday there would be less traffic. And so it happens that the trip to the airport only takes me fifty minutes to complete instead of ninety.

CHECK-IN
Garuda has its own domestic terminal here in Surabaya, which is Terminal 2. The facility looks rather new and very modern. The check-in area is only accessible for passengers with a valid ticket and you are required to show your ticket or boarding pass to enter the restricted area. 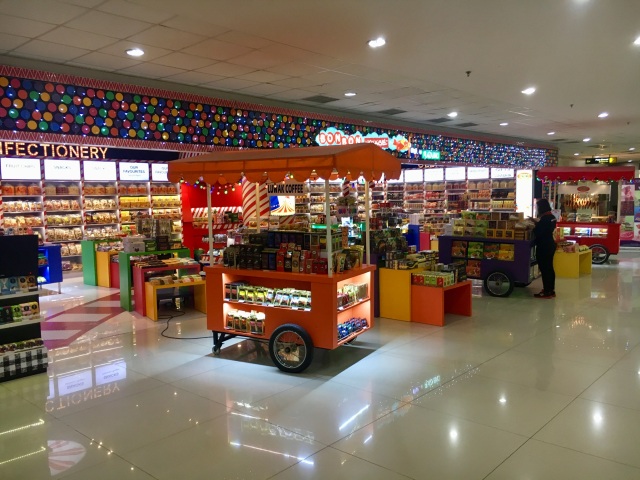 There is a separate check-in are for premium customers, located opposite the regular check-in counters. The lady at check-in is friendly and obviously in a good mood, and apparently she was expecting me. I was able to check in using the app, but downloading the boarding pass to my Wallet or sending it by mail or text message didn’t work.

AIRSIDE/LOUNGE
The security check point and lounge area are located one floor up from check-in. Much to my surprise, there is even a lounge for Business Class passengers. It’s fairly small. In addition, there are a few weather related delays, making it difficult to find a place to sit. But eventually I manage. 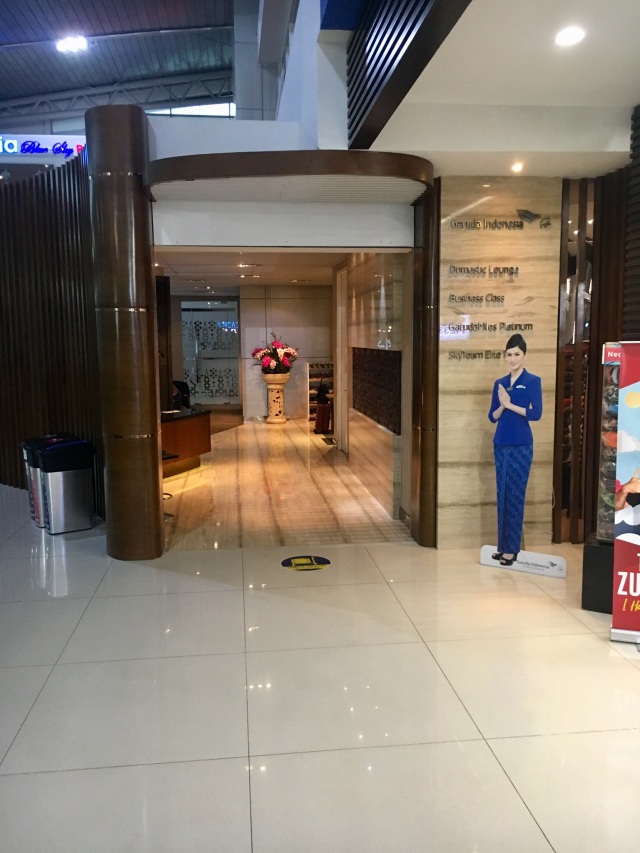 There are no washrooms in the lounge, and passengers should use the toilets next to the prayer room.

BOARDING
I think it’s safe to say we’re not going to leave on time. The previous service to Jakarta at 15h30 has been delayed due to weather and will now only be departing at 19h00. At some point, my flight shows up with a delay of thirty minutes, for a departure at 18h30.

Surprisingly though, 18h30 is when the boarding for my flight starts, which isn’t too bad. Eventually we close doors and push back at 19h10, with a delay of slightly more than an hour. The flight time is announced as one hour and six minutes. Although eventually, with the holding in Jakarta it’s more like ninety minutes.

CABIN
The cabin and seat configuration on the A 330-200 is identical to Garuda’s A 330-300 that I flew on from Melbourne to Jakarta. There is a pillow at every seat and blankets are available upon request.

CREW & SERIVCE
The flight is full this evening, so there are two cabin crew working the Business Class cabin. Again they’re friendly and polite. The steward approaches me and ask me if I’d like a welcome drink. He returns shortly after with a glass of apple juice and a scented cold towel. 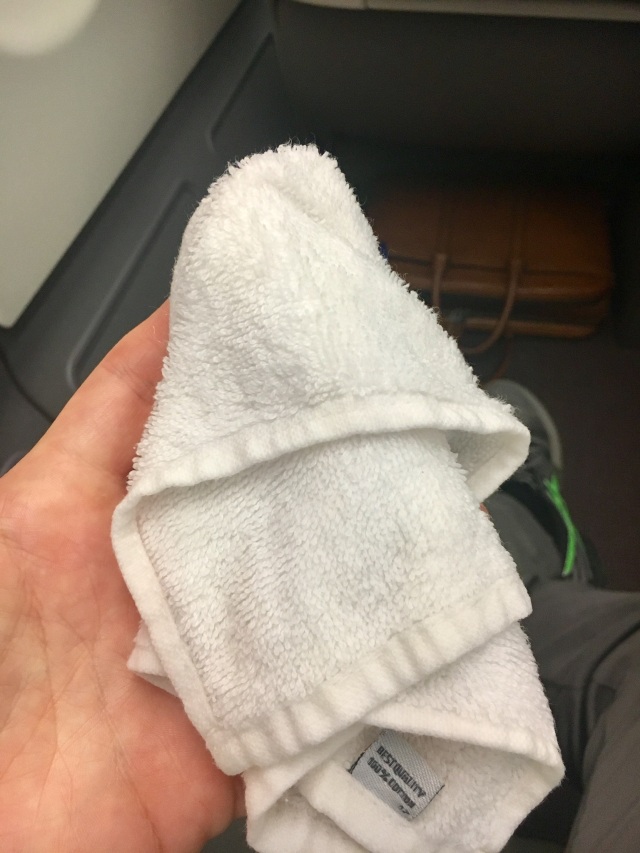 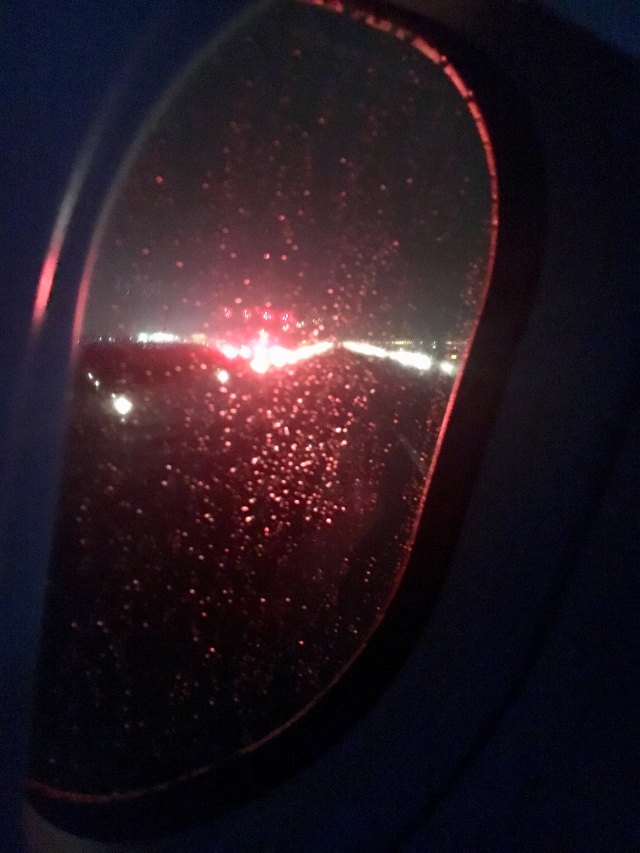 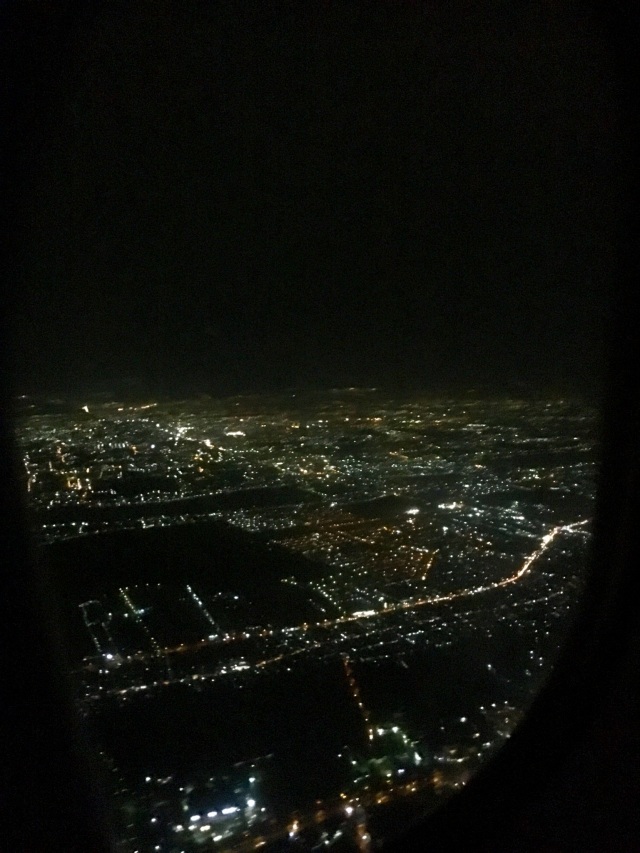 THE MEAL
As on the flight from Jakarta to Surabaya, the meal consists of

I go with the chicken, which is quite enjoyable. I have really no idea what the white and green dessert thingy is supposed to be, but it tastes okay actually. 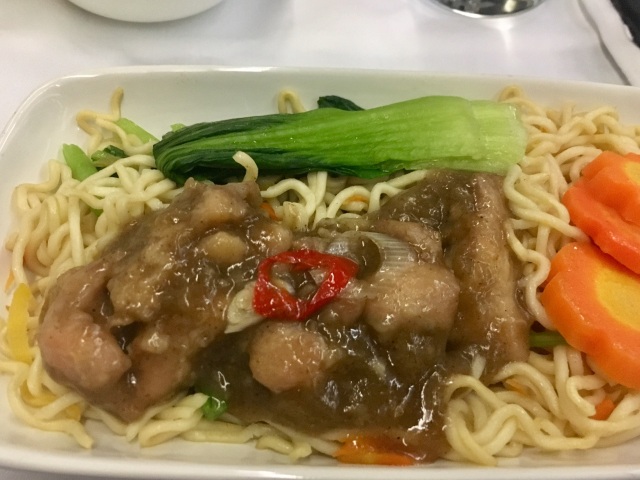 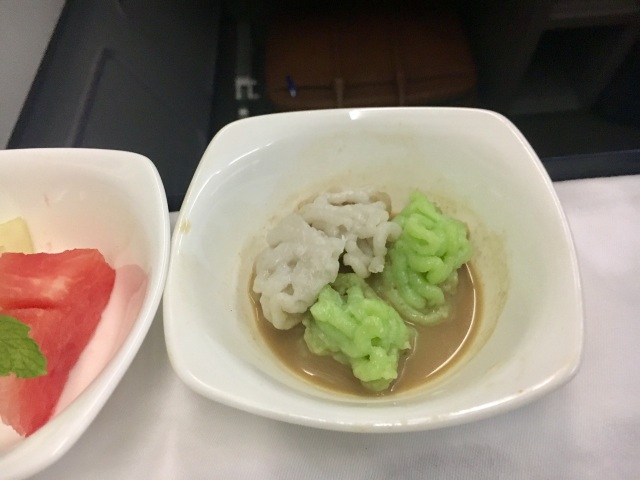 ARRIVAL
Eventually we land with a delay of not quite two hours. The aircraft comes to a stop at a gate on the international concourse, which means that after disembarking, we are bussed to domestic arrivals. There are separate busses for Business Class passengers. I will be spending my last night in Indonesia at the FM7 Hotel close to the airport. Ground transportation in Indonesia really is a nightmare, and the FM7 is only about a ten minute drive away from the airport.