The last time I took the Singapore Airlines flight from New York to Frankfurt was on 17 January 2008, on the last leg of a round the world ticket. Back then, the flight was still operated by a Boeing B 747-400. Let’s put it this way: the A 380 may not be as elegant as the mighty B747, but she is certainly a worthy successor.

Getting to JFK from Manhattan by public transport is horrible. The CitizenM is literally just a stone’s throw away from the underground station for the C and E lines on the corner of 8th Avenue and 50th Street, both of which make the journey downtown to Pennsylvania Station in about 5 minutes (USD3.- for a oneway ticket).

At Penn Station, follow the signs for the LIRR – The Long Island Rail Road. Unfortunately, the signposting is really bad, and if you are unfamiliar with the place, it may take you some time to get your orientation.

From Penn Station take a train for Jamaica. The journey to Jamaica will take roughly 20 minutes (USD10.- for a oneway). At Jamaica, the way to the AirTrain is signposted. The AirTrain takes another 12 minutes to make the journey to Terminal 4 (USD6.-). 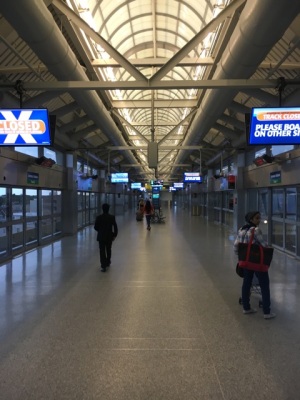 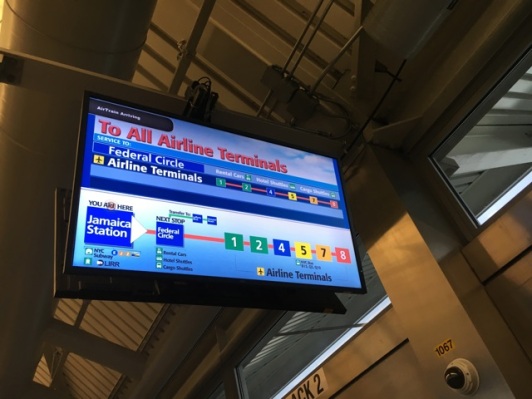 Location: Terminal 4, row 5.
Facilities: Singapore Airlines send an invitation to check-in by mail and by SMS 23 hours before departure. However, there really is not much point in checking in online, as you will have to present yourself at the counter at the airport anyway.
Counters: There are two counters for Business Class passengers. 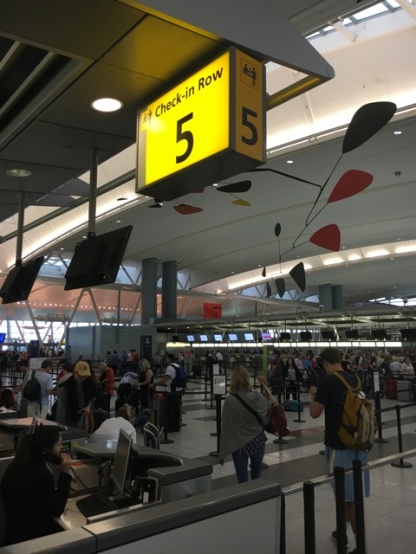 There is a separate queue for Business Class passengers.

Location: Behind security, turn right.
Type of Lounge: SWISS Business Class lounge.
Facilities: Toilets and showers are available in the lounge, there are also computers to work on and there is a quiet room. Power plugs are a rare commodity in the lounge, though. It is actually quite funny to watch the oh so important business types in the lounge skulking around the lounge looking for somewhere to plug in their laptops!
Catering: I think the catering in this lounge is much better than the stuff they serve in SWISS’ flagship lounges in Zürich. There is a good selection of hot and cold dishes. I have the lentil soup and it really is very tasty.
Internet: Wifi is available in the lounge, the password is displayed at reception. 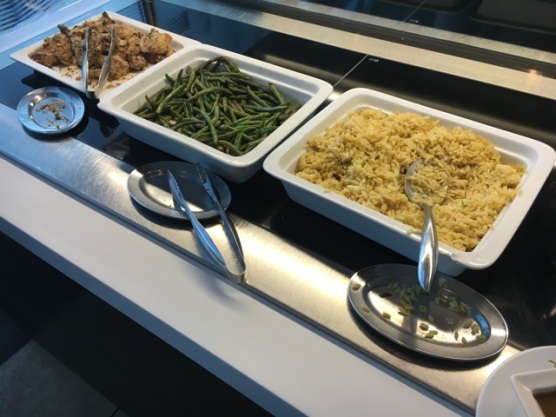 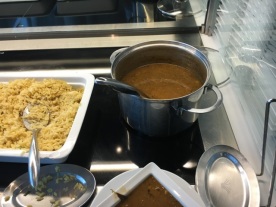 Apart from SWISS and Singapore Airlines, Egypt Air, Avianca and COPA also use this lounge.

There are three separate queues for First, Business and Economy Class passengers.

Configuration: 1 + 2 + 1
Seat: Fully lie flat with 180 degree recline. Singapore Airlines operates the A 380 in four different configurations. Basically there are some aircraft that feature SQ’s new Premium Economy seat and other which do not or not yet have that cabin installed. Add to that that capacity and layout in the different cabins may vary.
Pitch: 55 inches.
Width: 30 inches.
Facilities:

The crew on this flight are good and the purser in particular is chatty and quite entertaining in the way he interacts with the passengers.

However, what strikes me is that the meal service is somewhat inconvenient for the flight time and the time of departure: by the time we depart New York it is already 21h30 and our flight time is announced as seven hours. There is no light or quick option for the meal. When the crew come to take orders for dinner, I inform the young lady that I will not be having a starter or dessert and just would like to have a main course and then go to sleep. Even so, once the crew are released after take-off, I get the full treatment nonetheless.

The meal really is quite revolting and must rate among the vilest I have ever had on a plane. First of all, the antipasto plate: I only eat the tomato and mozzarella because the scallop and shrimp are emitting a rather off-putting stench.

Then the soup arrives and it is really not much better. Yuk! The slices of chicken are still slightly pink, instead of white and the rice noodles are all about 1 cm long each, making it quite impossible to eat them with the chopsticks. So I give up, and when one of the cabin crew passes through the cabin to top up the drinks, I ask her to remove everything so I can get ready for bed.

Five hours after departure from New York the captain comes on the loudspeaker to inform us that due to ‘a series of diversion’ en route we do not have enough fuel to make it all the way to Frankfurt, so instead we are going to divert to Heathrow to refuel.

Around about the same time, the crew start their breakfast, which seems a tad early, given that we are still two hours out of London and the breakfast service is not really that extensive. It’s pretty frugal actually.

The crew seem somewhat unprepared for this turn of events and suddenly the whole service becomes rushed. And for what? By the time my breakfast is cleared away, we still have more than an hour to go to London. I think it would have made more sense to let passengers sleep a bit longer, especially seeing as the seat is so inconvenient to convert from a sleeping position back into a sitting position.

Eventually, we land in Heathrow at 09h40, when we should have arrived in Frankfurt. We pull on to a remote stand and the refuelling starts. In the meantime, the crew have ordered snack boxes from one of the Heathrow caterers.

At 10h55 the captain comes on the loudspeaker again to inform us that refuelling is completed and we should be ready to go. But now the aircraft has developed an electrical problem.

No sooner has the problem been solved, a number of passengers decide they are feeling nervous and no longer wish to continue to Frankfurt. So a bus needs to be called to allow them to disembark. They are also going to have to unload their luggage, which can take a while on an A 380.

In any case, eventually we land in Frankfurt with a delay of five hours, at 15h30. I check on my app to find there is a Lufthansa flight to Basel departing at 16h40. So I decide to take a chance on that one and quickly make the booking while we taxi to our stand. I make the connection to Basel only by the skin of my teeth.

Now about Singapore Airlines: there are probably few airlines around the world that enjoy the reputation and brand recognition of Singapore Airlines. It is a reputation which, in my view, is no longer justified or deserved. As I mentioned in my post of the outbound flight, the seat really is just plain uncomfortable and inconvenient. It is too tight to lounge in and unpractical to convert into a bad.

As for the food, the presentation was so so. But the quality of the food on this last flight was quite simply atrocious. I also think the meals they serve are somewhat frugal. On many other carriers, you will at least receive a small salad in addition to the main course.

Would I go out of my way to fly Singapore Airlines again? No, I don’t think so.