TRANSFER IN MUSCAT
Upon entering the terminal building in Muscat, transit passengers turn left and then head up one floor to transit security and the airside area beyond. As in Zürich, the terminal seems very quiet and is certainly calmer than the last time I was here in 2016.

LOUNGE
The Oman Air lounge is operated by the same company that runs the Chedi hotel in Muscat and it shows clearly in the design of the lounge. The gentleman at reception informs me that boarding for my flight to Kuala Lumpur will be from inside the lounge. 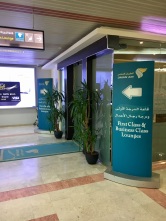 The lounge is also very quiet, with only a few seats here and there occupied. The lounge has all the amenities one might expect, including toilets and showers on the premises and a spa. Complimentary wifi is also available. Lounge access comes with a 15 minutes complimentary massage. 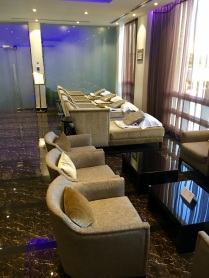 In theory, the lounge has some excellent views of the apron, but the curtains obstruct the view and I’m not about the make a spectacle of myself by lifting them to take pictures…

The buffet is excellent!

BOARDING
At 08h20 I go to the boarding desk inside the lounge and the gate agent directs me down the stairs to ground level, where a small mini bus is waiting to take the KL bound passengers to their aircraft.

Eventually pull up next to an Airbus A 330-300, together with the two regular busses carrying the Economy Class passengers. And then we wait. And we wait. And then we wait some more. Eventually, when our bus does start moving again, it’s to take us back to arrivals. I ask the bus driver what’s up but he’s none the wiser. So I step inside the arrivals hall and ask one of the Oman Air agents there about the status of my flight. To which he tells me to go back upstairs, through security again and then to gate 20 for further information. 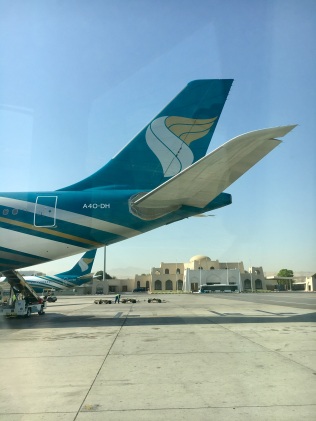 So I do that. At gate 20 nobody really seems to want to be responsible. So I ask some random guy in an Oman Air uniform what’s going on and he tells me that our flight has gone tech. I should return to the lounge and await further instructions. Brilliant! Oh yes, and I’m given the rather funky and very old school Egypt Air transit card. Not quite sure what to do with this though…

So I return to the lounge and figure I might as well have breakfast. After about thirty minutes in the lounge, the flight to KL is called again and so I head downstairs once more to the waiting bus. This time everything seems to go without a hitch. Eventually we take off form Muscat with a delay of 75 minutes at 10h05. 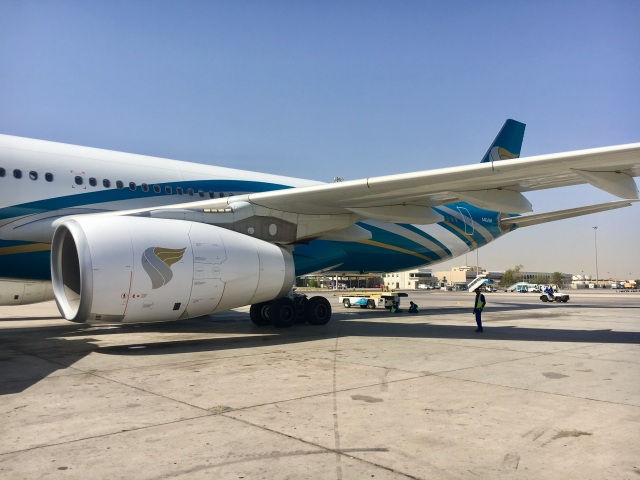 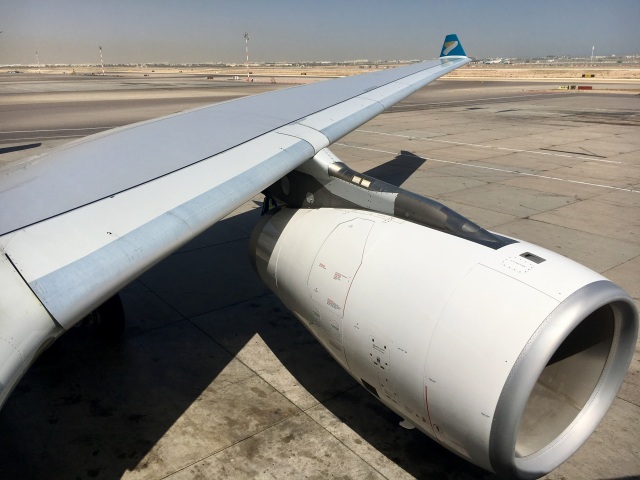 CABIN & SEAT
The seat on this aircraft is the same as the one on the Boeing B 787-9. Immediately after take-off I change into my running shorts and lie down to have a nap. The seat really is very comfortable and provides ample space, even for a larger person. I am 184cm tall and could stretch out fully. The seat is also wide enough for me not to hit anything or knock something over when I turn.

Every seat is equipped with USB ports and an AC power port.

CREW & SERVICE
The crew on this flight are much better than the previous lot. You can tell by the ease with which they interact with the passengers and the efficiency with which they complete their pre-departure tasks. To be fair, they’re probably also in a good mood because there are only eight passengers in the Business Class cabin on this flight. 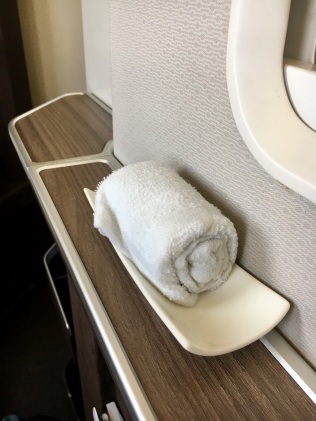 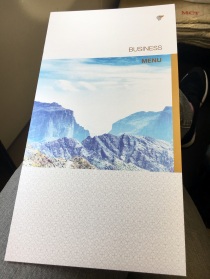 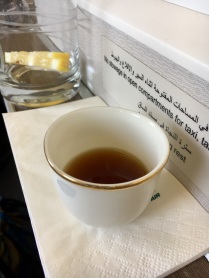 VANITY KIT
The vanity kit is identical to the one I received on the previous flight from Zürich. I think I forgot to mention in my previous post that the kit for men also includes a one-way shaver with shaving cream.

IFE
Once I wake up again, I make a closer inspection of the inflight entertainment system. The selection is sufficiently large, but even so, I think there isn’t a single thing I would actually want to watch. Then again, perhaps there are people who actually do enjoy watching the untalented Mr Gosling trying to make his mind up whether he wants to talk or sing his way through an entire movie…

FIRST SERVICE
On this flight the service makes a lot more sense than it did on the previous flight and follows the same sequence as my morning flight from Dubai to Amsterdam the week before. Just after departure a small breakfast is served, which I pass on, and then the proper of full meal service takes place before landing in KL.

SECOND SERVICE
About two and a half hours out of KL passengers are starting to stir from sleep so it’s time for the crew to begin their main service. As on the previous flight, there are four options for the first course, main course and dessert. I have the following:

The soup is served with a cheese stick and lemon, which goes surprisingly well with the fine taste. There’s also something spicy in there to give the soup a bit of a zing.

The main course is tasty, although the pasta is definitely overcooked, which is normally the case when you have pasta on a plane. My favourite though is definitely the dessert. 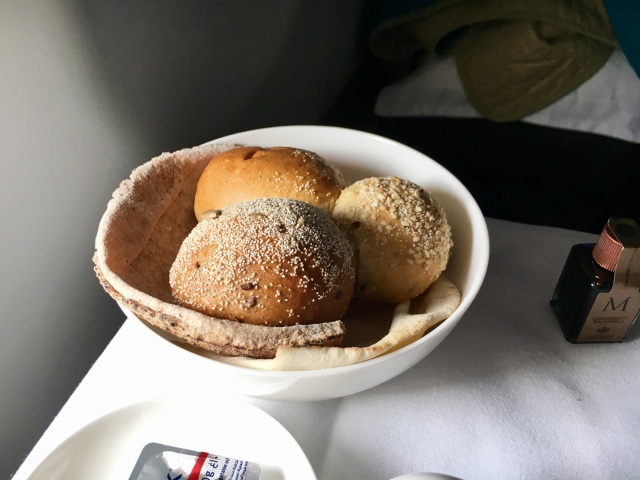 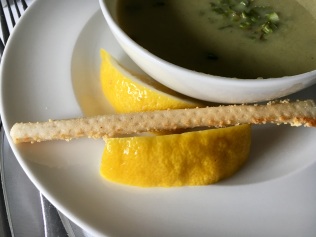 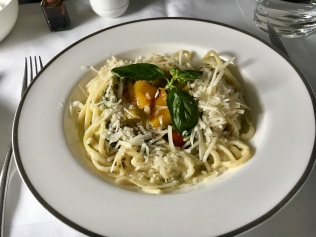 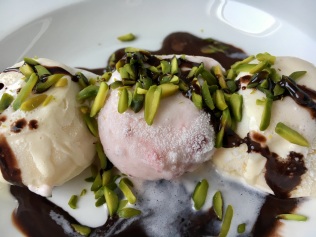 ARRIVAL
We land in KL at around 20h40, more than an hour later than our scheduled arrival time. The approach is pretty spectacular. There are storm cells in the vicinity of the airport and with the darkness around us, the bursts of lighting look pretty impressive!

CONCLUSION
Okay. On this flight Oman Air definitely managed to redeem themselves after last night’s rather unpleasant flight from Zürich to Muscat. The delay was not such a major issue for me and we were only a bit more than an hour late arriving in KL. However, I do think the staff on the ground could have handled the situation much better. No information was given at any time unless you explicitly asked for it, which is obviously not the way to do it in case of an irregularity. All in all, Oman Air is a nice little airline but they lack polish and professionalism in my opinion.